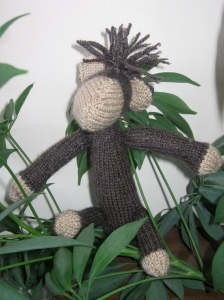 Meet Mr Dangly.  The sort-of-monkey that I was telling you about recently.  He doesn’t have any eyes yet – I need to go and buy a couple of buttons that are just right, probably in a light natural wood.  I like him, even though I attached his tail somewhat off-centre.  I didn’t have any definite plans for who was to receive him, but I think Lego Nut might just adopt him.  I must warn you that there are a few errors in the pattern, but a bit of common sense will see you through the decreasing okay.

gifts in the mail

I had a lovely surprise in my mailbox today.  Beatnik sent me this coffee cup warmer (an attractive alternative to those paper sleeves that you get in coffee shops) and a pretty bracelet with a peace sign on it.  Thanks, Beatnik, I love them.

I spent the afternoon at a friend’s house today.  I took my sock-in-progress but felt that I’d rather work on something a bit more interesting.  So I grabbed this skein of James C Brett Marble.  It’s a new colour, romantically named MT21 – a gorgeous blue.  I only bought one skein so I needed a suitable project and so I decided on the Baktus scarf which I heard about on Ravelry.  You start with 4 stitches and increase a stitch every fourth row until you’ve used up half your yarn.  Then you decrease back down to 4 stitches and you end up with a long shallow triangular scarf.

I’m trying to ignore the pain in my left leg at the moment, but it’s really bruised.  We had a heavy sparring class this evening which ended up with me being bright red in the face, sweaty and bruised all over.  I had kicks in the ribs, punches in the face, and right near the end someone’s knee went into the quad muscle at the front of my left thigh.  They call it a “charleyhorse”.  I limped off the dojang floor and when I got home I had a heavenly shower followed by a generous application of arnica cream.

And finally, great news!  My friend who had pneumonia is probably going to be discharged from hospital tomorrow.  It took 12 days, but she’s well enough to go home.  It’s such a relief to see her looking almost her usual self again.