I don’t know about you, but maybe it’s my British genes – I call a turtle a turtle and a tortoise a tortoise. You know, turtles are the ones with flippers and live in the sea, only dragging themselves up the beach once a year to lay their eggs in the sand. Tortoises, however, live on land, and have completely different legs and feet. And shells. (Americans seem to call everything a turtle.) 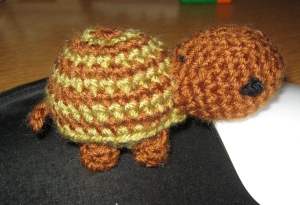 This pattern is called Tiny Striped Turtle, but it is actually a tortoise. A rather cute one. (Scroll down to page 38 on that link.)

His head is a little heavy as he tends to fall on his face, but I’ll forgive him that. Those little legs, that teeny tail. Started last night and finished this morning (in a rather self-indulgent start to the day where I got up with my iPod cricket-chirping alarm at 8am, made myself a Yorkshire tea, and went back to bed with my crochet to add the appendages to the shell I finished last night).

I considered beads or buttons for the eyes but the black yarn works best.

It was such a dark day today. The clouds were low and black, it rained for part of the day, and we had to have the lights on indoors the whole day. I didn’t even bother opening the boys’ blinds when I wanted to wake them up – just turned on the overhead light. It’s wet and windy again this evening – I can hear my wind chimes outside.

Maybe I will have to invest in some of those big packs of 100 LED lights I saw at Costco and brighten up the place, even though it’s not Christmas for another five weeks. Yes, only five weeks. Less than that to the Solstice, the longest night of the year.

Have a bright day!