Hello! I just realised last night that I have been neglecting you a little. Over a week has gone by, which is not like me at all.

What have I been doing? Well, spending too much time playing Scrabble on my iPad for one. And emailing, Facebooking, Ravelrying, and generally thinking about knitting more than doing it.

I’ve made four potscrubbers and two hand towels so far with the Dishie. I will add a button to the second towel and post a photo soon. I have started on a third towel with the last ball of Dishie. I can get one towel and two potscrubbers out of one ball with a bit left over.

I watched a couple of movies last night and did a few rows on the Garter Swing Coat but mostly it has been languishing in its bag. It’s not going to get finished at this rate!

I taught a knitting class on Thursday, the first of three. Three girls and a boy. They had all done some knitting before, taught by family members, so we whizzed through the material I had planned for the first two sessions! Knit, purl, casting on, binding off. This week we’ll do increases and decreases and hopefully they will have decided on a project to make. I gave them three patterns that I wrote without abbreviations so they’d be easy for beginners but suggested they look at Ravelry for inspiration.

I’m hoping that this will be the start of more teaching for me.

I have been cooking out of The Starch Solution and The Happy Herbivore this week. Made some fabulous “carrot cake” cupcakes with “cream cheese” icing. No added fat in the cake batter, just applesauce, and they were moist and flavourful. Yes, I counted them into my calories for the day. I was rather hoping that I would shift the last pound in time for the 8 week point, but it wasn’t to be, so I’m still following the plan (mostly). Saturday night, I ate a large plateful of Asian veggie “chicken” (soy fake meat) and rice, which was zillions of calories, made me feel overstuffed, and didn’t really agree with my digestive system. So it wasn’t really a treat.

Yesterday was warm but mostly cloudy so Tai Chi Man and I took a long walk which included some good hillwork. Felt really good as I’ve been a bit remiss on the exercise this week, which is probably why I didn’t see much improvement on the scales.

I’ve had the sewing machine out too, as I had to mess about with some cheapie commercial curtains to get them to fit into the spaces between the pillars on my deck. Now we can have instant shade, which is great as the sun is getting lower and shines right in at the end of the day. I also made a couple of bandannas for ds1 and I love the fabric he chose (see photo). I have a commercial bandanna which I measured, but it’s too small really, so I bought 70cm of each fabric, cut squares as large as I could, hemmed them, and they are a good size for wearing on the head or around the face.

Ds1 is off on his road trip tomorrow. This long-awaited trip is finally here and he has been shopping and planning maniacally. Hopefully everything will fit into his car and he will have all the essentials covered. We added him to our BCAA coverage, just in case something happens and he needs a tow truck.

Well, I have some important shampooing of furniture to do, so must be off. 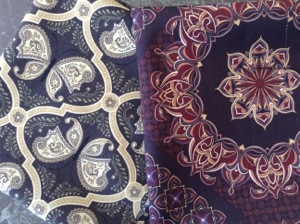 Adding a photo of the towel…