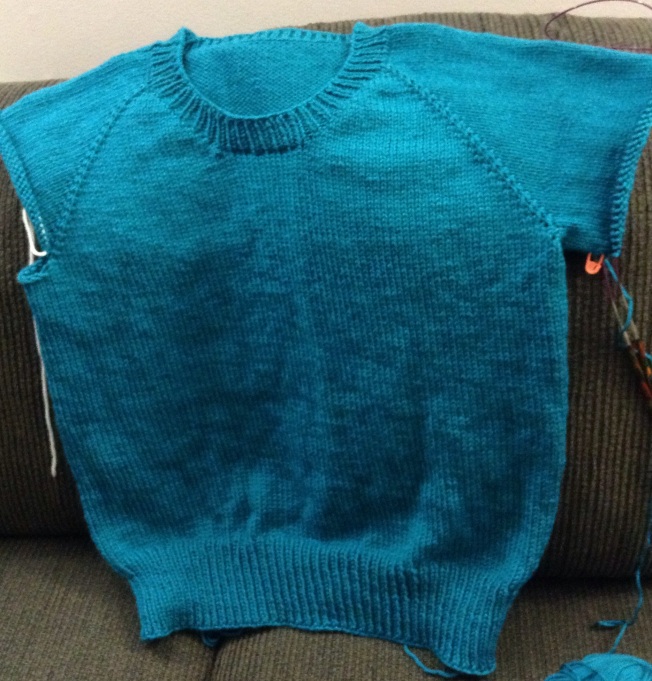 “The Sweater” is proceeding tonight. It has been ignored this week in favour of the Prayer Shawl, as I felt that that needed more urgent attention.

Also, I took ds2 and ds3 camping for four nights, and it was easier to knit on something brainless like a garter stitch rectangle, rather than a sweater.

I have to tweak the numbers here and there, as my row gauge is a bit off, so instead of knitting 13 sleeve rounds then decreasing, I am knitting 12.

I just put it on and I’m happy with the width of the body and the length, so that’s good news. It looks rather uneven but I think a toss in the washer and dryer will sort that out at the end.

So…camping. I think that the last time we went camping was about 9 years ago. I have not had the urge to sleep on the ground in recent years (I can’t imagine why!) and I tend not to sleep well in a tent. And I really dislike going to the bathroom in the middle of the night, not knowing if there are wild things lying in wait!

However, Tai Chi Man booked a two week holiday to visit family back in Britain, which at the last minute included a week in Switzerland to visit even more family. His mum has been diagnosed with mixed dementia and he felt it was a good idea to go now. So I thought the two teens and I should have a bit of fun too, and I booked a site at a private RV and camping resort just over an hour away.

We had a sandy site right next to a lake, power and water at the site, a picnic bench, and hot showers. Definitely what I call ‘soft camping’ though not as soft as RVing! Mostly sunny weather except for one evening and morning of rain. I took my farmers market tent/roof/canopy thing, which was invaluable for sun and rain protection and for hanging things up to dry.

A couple of mornings I had a peaceful swim (followed by a shower – there were lots of ducks and I didn’t want to get swimmer’s itch). I was so glad there was no wifi as it forced us to make our own entertainment, so we walked, played games, read books and cooked veggie dogs and marshmallows over campfires. Admittedly there was a couple of stops at the local library to check emails etc, but there was way less screen time than usual.

Monday to Friday was the perfect amount of time, and we avoided the Labour Day/weekend crowds, and only had to pay Low Season rates. And our Toyota Matrix managed to hold everything we needed, packed to the roof as it was, plus stuff on the roof rack.

It’s nice to be back in my own bed now. Camping makes you appreciate the conveniences of your home all the more.

Tai Chi Man is due to return tomorrow, which I am looking forward to, but he won’t get a rest after all that travel. He has to work Monday morning.

Enjoy the rest of your weekend.