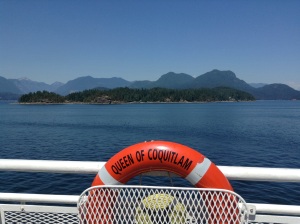 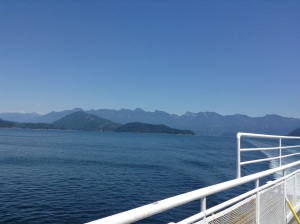 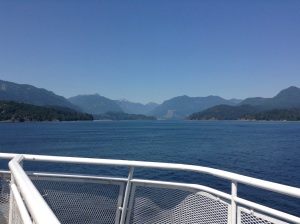 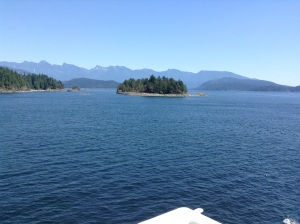 I set my alarm for 6am again this Monday morning. Trying to achieve a new habit of “early to bed, early to rise.” For a person who has mostly been a night owl rather than an early bird, this is a challenge.

It’s been over a week since I had to get up at 5 for work (inventory day) and every day since then I have pushed myself out of bed at 5 or 6am. At least it’s the coolest time of the day, so that’s one benefit.

It also means that I can sit and wake up slowly with my lemon water, Yorkshire tea and iPad, checking email, Facebook and Ravelry. That’s my morning routine and it is a flexible thing that can take a short time or a long time, depending on how far I go through my Facebook news feed or how many threads I delve into in the Ravelry forums.

I have some sore muscles today. Saturday morning we were up and out the door by 8am. Tai Chi Man and ds2 and I had to be on the road by 8am, with the plan to catch the ferry to the Sunshine Coast at 1.35. We packed, closed up the windows and doors, loaded the car, and at the last minute I emptied the compost bucket from the kitchen. On the way back up the garden, my sandal caught the edge of the concrete pad outside the back door and I fell forward, landing on my hands and knees. Thankfully there were no holes in my capris, so I brushed myself down and carried on. The next day I was complaining about a painful shoulder and Tai Chi Man pointed out that I probably wrenched it when I fell. (Nice bruises on my knees too.)

Anyway, four hours in the car and we made it to the ferry. It’s a beautiful scenic crossing from Horseshoe Bay, north of Vancouver, BC, to Langdale on the Sunshine Coast. It helped that the sun was shining and the sea was calm.

Our motel was a short drive from the ferry terminal in Gibsons. The room and en suite bathroom were spacious, if a little under-lit, but the kitchenette was teeny. A sink, stovetop with two burners and a strip of countertop that was maybe four inches wide, with a fridge underneath and a cupboard above.

Our afternoon was spent discovering the local IGA supermarket and then Soames Hill Park. This park was maybe ten minutes drive from our motel and is a beautiful shady old growth forest. The trails varied from easy to challenging – we chose to take the steep route right to the top of the hill, about a 700ft elevation, to enjoy the view out to sea.

My calves are still sore, two days later, but it was worth the climb.

I had a dip in the pool when we got back to the motel, which just happened to be a few feet from our door. Perfect!

Dinner was basic but edible. I made some tortillas with flour/baking powder/salt that I’d mixed at home. Of course I had nowhere to roll them out and even if I had, I had no rolling pin, so they were very smaller and thicker than usual. Still, they worked okay with the refried beans, avocado and tomatoes.

Ds2 looked settled in for the evening after dinner, with his bag of tortilla chips, TV and iPod to hand. Tai Chi Man and I went out to find a sunset. Having checked the map, we found a road that led to the ocean, where we enjoyed a gentle walk followed by a rest on the natural seating at the top of the beach (aka driftwood). There we watched and waited while the sun set.

Sunday we had a slow start to the day, but had to be checked out by 11, which worked perfectly for going to pick up ds3 from summer camp. That was a short drive away in Roberts Creek. He’d had a great time, just like last year.

We drove back to the ferry and had to wait, of course. They had an unseasonably hot weekend on the coast and we were parked in full sun for an hour. Thankfully we could get out of the car and go to the washrooms or stand in the shade for a bit.

On the ferry, ds3 met up with some of his camp buddies again and they ganged up and circuited the ship numerous times.

We had plans to do some shopping in Richmond at some Asian stores so that added about three hours to our drive. (Tai Chi Man drove over 800kms in two days.) Unfortunately the last store was closed, with it being a Sunday ‘n all.

We made it home safely at almost 9pm and even though we were only gone for a weekend it felt longer. I feel we must return for a longer stay one day though.

There was crocheting on the road, of course, in between the snacking, reading and navigating. I am making a pair of bobwilson123’s Granny stitch slippers again – and I had a big DOH moment when packing a project on Saturday that for ages now I’ve had these plans to make lots of slippers and instead I used up a bunch of scraps on hats instead. Hmmm! Silly me.

I could easily have finished the pair this weekend, maybe even two pairs, but I don’t seem to have the concentration required when on the road to crochet constantly. I have one and a half slippers done and it won’t take long to finish the second one. 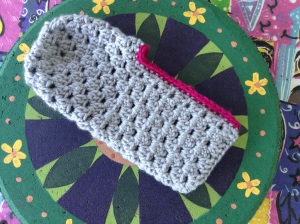 I’m so glad I don’t have work today. In fact I have the next few days off, and I know that today is going to include lots of laundry. We all know that road trips = laundry, right?

I probably should throw the first load in now.

I hope you had a wonderful weekend. Happy magnificent Monday!