A few weeks ago, Stylecraft had a giveaway of four different yarn kits. One was comprised of their Classique Cotton DK, a couple were Malabar (I think) which had silk in it, and the last was a yarn that was kind of variegated with a lot of white in it. All you had to do to get a chance or two to win was to comment on the Facebook thread and/or sign up for their email newsletter. I did both, never expecting anything to come of it.

Well, I received an email while on holiday (I have to confess, I think I deleted their first one as wifi was crap and I was trying to minimise what I had to do online, so it was zapped without  me reading it). Thankfully they tried again, I read it, and got all excited. I was at my mum’s house at the time and my mum and sister must have thought I was getting way too excited at the thought of free yarn, but hey, they are not knitters or crocheters.

I had expressed a preference for the Classique Cotton because obviously being vegan I don’t use silk. Also I didn’t much like the fourth option. But I even had a choice as to a cream background or teal – well, if you know me even a little, you’ll know I love teal.

Ta da! The pattern leaflet and the yarn… 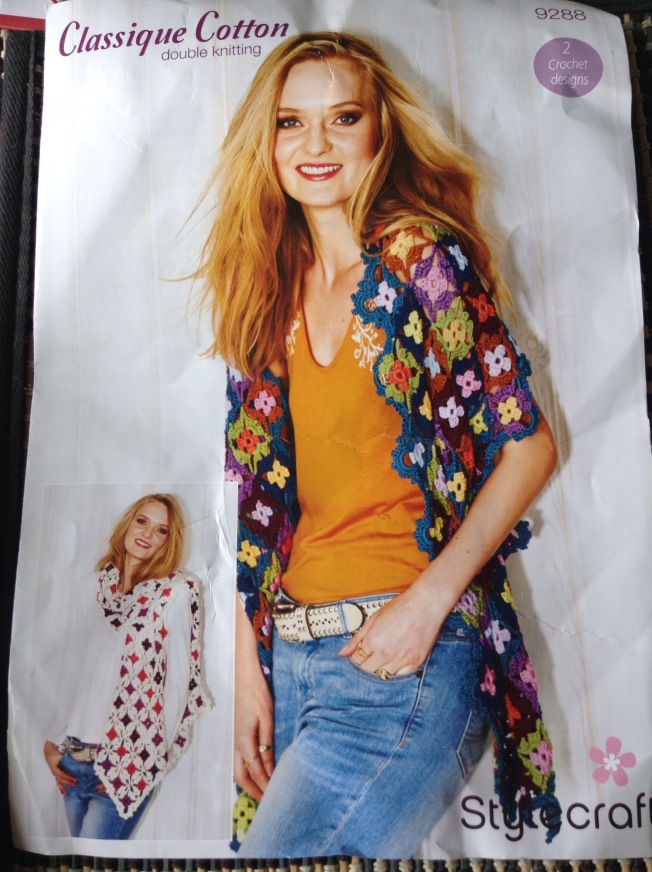 This is pretty unbelievable, I know, but I went about a week without crocheting. I finished the Dragonfly scarf while in Jersey, gave it away, and didn’t start anything new (not even on that 8.5 hour flight from London Heathrow to Calgary). Since then, I’ve been wondering what to make next, but distracted by getting back into the swing of things at home. Today, I went to a friend’s for tea and just had to have something, so I took along the ball of Loops & Threads Chameleon (very well-travelled, it is, as it came along on holiday with me) and started a cowl with an 8mm hook in Tunisian Full Stitch.

It’s just 21 stitches wide, which is about 7 inches, and so thick and smooshy. It’ll make a very comfortable and warm cowl.

We’ve had a surprisingly rainy couple of days, which has been good for the garden, and tomorrow we’ll have to plant the annuals that we bought at the garden centre today at their two-for-one sale.

Have a great weekend.