A quickie post to show you how Demelza and the Peacock Tail Bag are getting on. 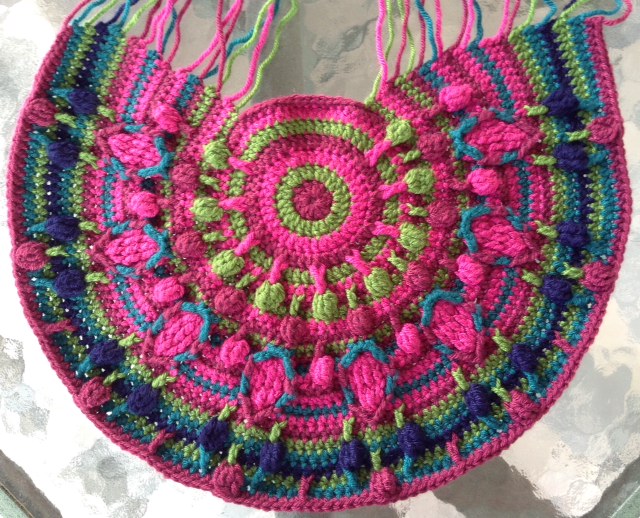 I just finished Part Four, Front, of the bag. So happy to see the fifth colour, the indigo, finally being introduced. This last part, even though the rows were long, seemed to fly by (except for those front post treble four togethers in the dark indigo – not so fun)!

I now have to complete the plain rows on the back piece and then I can put this project back in its bag until next Wednesday when Part Five will be released. (I have had my suspicions confirmed that I crochet quite tightly – I used a way bigger hook than the designer but my bag piece is smaller by .75″.) The piece above is 13.25″ across.

Again, smaller than the pattern says – this is about 14″ instead of 16″ using the exact same yarn and hook as the designer. I used all 15 colours, obviously repeating most of them. I chose my colours as I went along and I’m pleased with the result. The photo shows more contrast than exists in real life.

Well, enough waffling I guess – if I want to get more crocheting done before having to cook dinner I should get on with it.