We woke up to snow this morning and it has continued all day. Tai Chi Man has cleared the drive a few times to make sure it doesn’t get icy when we take the car out. We were planning to go to a friend’s house this morning and were on the road by 8.30am for a potentially 40 minute drive, but the traffic on the highway was crawling along so slowly that we decided to turn back.

I took the opportunity to start studying my new course – it’s an online course with eCornell all about plant-based nutrition. I’m just on the first module but by the end of January I will have a certificate to say I’m up to date on all the science and the reasons why a whole-food plant-based diet is the way to go. Just confirms what I’ve already known for years, of course, but I’m still learning new stuff from this course and it gives me some extra ammo when sharing with people why this is the healthiest way to eat. It may even become a career for me later on.

I also frogged the partially completed toque (hat) that I started a week ago and restarted it on bigger needles and with two fewer stitches. The pattern tells you to knit for 7″ before decreasing, but at 6″ I put in a lifeline and then tried out the decreases. I had enough yarn that I decided to rip back again, knit two more rows, then decrease again. I actually could have done at least two more rows, looking at the amount of yarn I had left, but no way was I going to frog for a third time. This process also included un-knitting a row because I had all my knits and purls the wrong way round!

The fisherman’s rib would look tidier in a less bulky yarn, but I’m just glad this one is done. I’ll take it to work and put it on a mannequin head for a bit, then I know exactly who I’m going to give it to. (Yarn is Dynasty hat yarn, Fabricland’s house brand.)

Another small project I finished yesterday is this Dumpling Kitty, who I have named Custard. This is a free pattern, only available as a Ravelry download, hence the Rav link.

This cute kitty is made with Stylecraft Classique Cotton DK and a 3.75mm hook. I happened to have the perfect colours and I know exactly who this one is for too. 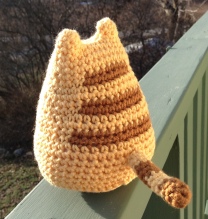 I now only have one WIP and that is the caterpillar blanket. I have made a start on it and will give it a separate post of its own soon. Have a great day!