Here I am, sitting on the couch with my crochet and laptop as usual. Well, they do say you should start as you mean to go on!!

It’s been a good week.  A few not-too-busy shifts at work. A fun potluck last night with friends. And only one WIP to start off the new year.

The current project is The Very Happy Caterpillar blanket by Artisan Loops Designs, aka Ne11 on Ravelry. (Yes, that IS Nell with two ones.) It’s a paid pattern which she kindly sent me as a gift some time ago. My Ravelry project page says that I started it on December 6th, but despite that I haven’t made much progress. The blanket has a row of coloured circles in the top row and two rows at the bottom, so I crocheted these circles first. The final white joining round is one I was dreading a tiny bit as the layout of the pattern has lots of little picots around the circles for joining them to each other and I was getting in a tizz about them. But as usual, getting them done was easier than I had anticipated and now I have a full row done. I did make a teensy weensy mistake on the last circle, adding an extra picot where one wasn’t needed as it is a corner circle. That is now fixed. 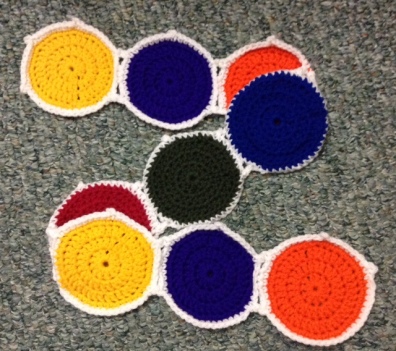 The yarn is Loops & Threads Impeccable, which is an acrylic worsted weight yarn from Michaels, and these colours are yellow, purple, orange, blue, dark green and red. The green looks better in real life, and the photo isn’t showing much differentiation between the blue and purple. Anyhoo, so far, so good. I have pushed through the thing that was making me procrastinate and I am off to the races.

If I need a small portable project at all, I think I will make another caterpillar hat in a larger size. I would hate for the one I made to be too small. Better to have it a bit too big than too small. And the cocoon, well, I think I will be adding a drawstring to the top of it, as the opening looks huge. Just my thoughts as I type away here, excuse my rambling!