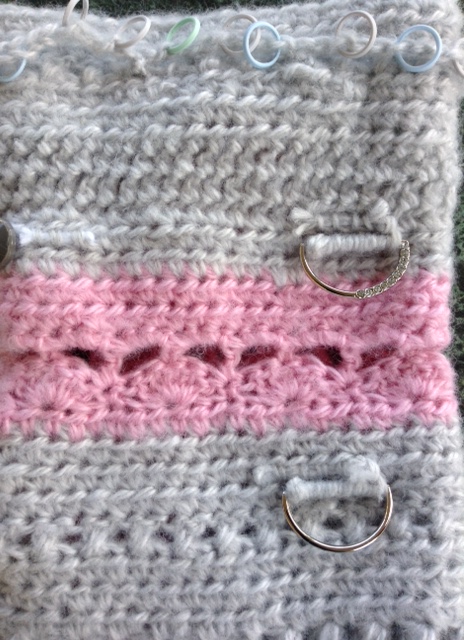 I’d better explain. Knitters and crocheters are making these twiddle muffs for people with Alzheimer’s. Apparently having something to fiddle with helps with anxiety. So once you have the basic shape, which is a tube of single or double thickness, you add various doodads to make it interesting. Different stitches for texture, buttons, flowers, D rings, beads, whatever you like.

Mine is crocheted in fuzzy Patons Diana, as I have a lot of it from another person’s destash, and I added flowers sewn on with buttons and a string of beads on the outside, and some D rings, plastic rings on a crocheted chain, and buttons on the inside.

This is for my boss’s mother, who’s in a home with dementia. Hopefully she will like it and it will get some use.

It’s been a beautiful sunny day today, around 20 degrees, and Tai Chi Man and I headed for a nearby  mountain and discovered a new trail. We also had to buy a new kettle (the old one just quit) and we were happy to find a Kitchen Aid one at London Drugs that can be set to heat to any temperature from 50 to 100 Celsius. We also picked up a couple of new Pyrex dishes because I did a very silly thing this morning. I was making oat bars, and had my nice blue 9 x 13″ dish full of mixture ready to go into the oven. I also had a pan of water on stove, behind the dish, that I wanted to heat to make tea (because the aforementioned kettle died). Well, I stupidly switched on the wrong hotplate, walked out of the room briefly to talk to Tai Chi Man, and was suddenly half deafened by an explosion as blue glass shattered in all directions. I’m very thankful no one was close by at the time. And what a waste of food.

I seem to be on a run of stupidity, or shall we call it lack of mindfulness, lately. Broke a glass last week when the jar of salt slipped out of my hand. Damaged BOTH our cars when I backed out of the carport, forgetting my dear husband’s car was halfway up the drive. We were talking at the time, I was distracted, and the resulting collision was sickening. Broke the Pyrex dish today. Snipped my finger as well as the yarn while making the muff. Good grief!

Time to make tea and get on with things….carefully!