I don’t have a lot to show for this week. There were actually a couple of days when I didn’t pick up hook or needles until I realised that my mild anxiety over my upcoming holiday would be smoothed out by making something simple. I pulled out some Bernat Handicrafter last night and crocheted a dishcloth and felt better.

However I do want to show you these kits…

I work at a fabric store which also stocks a small amount of yarn. Every now and then, some boxes arrive which must be part of some sort of buy-out. I once bought a dozen facecloths, really smooshy ones, for about 40 cents each. This time, it was these kits. My boss showed me the kits and I thought, well, those are going to be expensive, maybe $30 each, so I doubt I’ll get one. Then she looked up the retail price on them and it was……$3.40!!! OMG! Less my staff discount, I picked up these three kits for less than ten bucks. (Those kits were gone, mostly to staff, within 24 hours!)

They have yarn, pattern, crochet hook, darning needle, toy stuffing, safety eyes – basically everything you need.  I don’t know how great the acrylic yarn is, or how strong the plastic hook will be considering it’s a 3mm, but I have metal hooks so that’s not an issue.

The monkey and the rabbit came in larger boxes but the monster was in a smaller one, and I was amused to open the monster kit and find it all vacuum packed within an inch of its life. 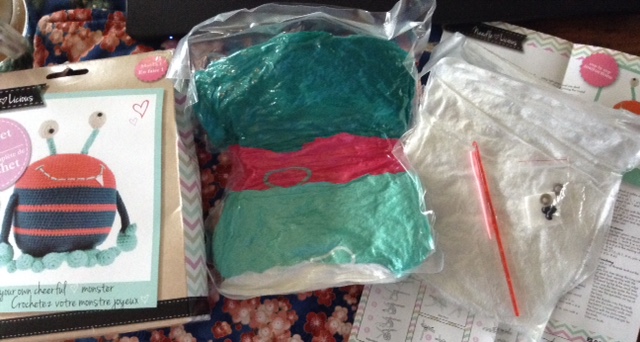 I cut those packets open to let everything puff up back to normal.

So yes, my holiday starts Monday and it involves three flights, one of which is about 9 hours long, across the Atlantic. DS1 is coming with me. Of course packing is easy, as we keep it light to avoid baggage check-in and waiting at the carousels, and the biggest decision is my travel knitting/crochet.

After a lot of Ravelry browsing, I was inspired by a colour change cowl and had a lightbulb moment. I am therefore taking eight colours of my Deramores Studio DK and my sets of interchangeable Knitpicks needles and Denise hooks. The plan is to start knitting a cowl or scarf in the round, casting on after going through airport security here, and change colour for each leg of the journey. There’s always so much waiting around at airports, knitting opportunities in planes and cabs and during one’s holiday, that I should be able to finish a project in the two weeks I’m away. And if I need more yarn, I can pick some up over there.

This weekend involves some last minute shopping, bread baking, laundry and cleaning. The Plant-Based Nutrition presentation that I was going to do tonight has been postponed so that’s freed up about five hours, if you count travelling time, so I am less pressured. Tomorrow we have a potluck lunch at someone else’s house.

We have had an abnormally wet spring here in the Central Okanagan (BC, Canada) and with the milder temperatures, the melting snowpack and the rain have caused the creeks to burst their banks in many places and the lake to rise quickly. It is managed at the south end by a dam, but it’s rising faster than it can be released. We’ve had flooding in a number of areas on both sides of the lake, and people evacuated or on alert. Thankfully we are high and dry here, away from the lake and any creeks, and the lawn is about a foot deep in new green growth, the trees have leafed out and the lilac has blossomed. Tai Chi Man says he’s going to mow the lawn this weekend, which is a shame in a way, but it does look tidier when it’s all one length, even if it IS a mixture of grass, yarrow, weeds, and bulbs.

Well this turned into a long spiel so I shall sign off. If things are quiet around here, you’ll know why. I’ll be having too much fun with my mum, my sister, her daughter-in-law and the new baby! This holiday is all about the women!