Greetings dear readers. I see that I have not been here for a week (is it just me or is time speeding up)?! I have been battling…erm…crocheting with some more Scheepjes Linen Soft this week, this time in hot pink (colourway is called Hummingbird).

It’s a beautiful colour but I have been using a 3.5mm hook to make this dress and whilst the initial small squares were easy peasy the single crochets that are worked into the squares top and bottom have been brutal, especially where I had to work into a chain rather than a proper stitch. My poor hands!

At least the yarn, being a linen/cotton/acrylic blend, was willing to be blocked into submission because my little finished bodice looked pretty sad.

I snuck some decreases in above and below the squares because it just looked like there were way too many stitches there. Another modification to the pattern was to add small shoulder straps (borrowed an idea from a fellow Raveler’s project page). 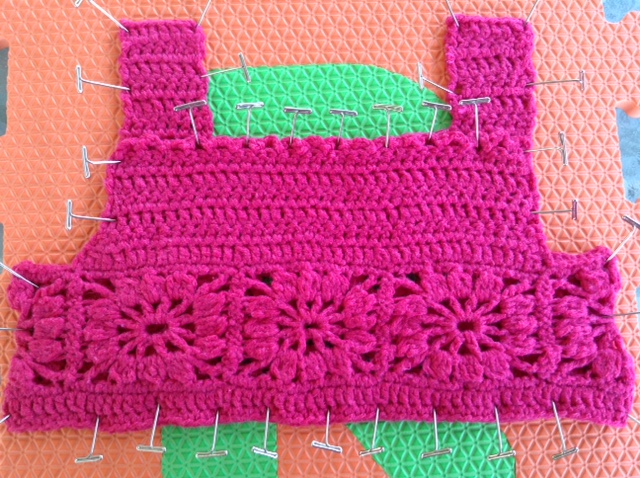 The heat in the upstairs half of the house drove me downstairs to my sewing room tonight, which was a good thing as the skirt portion of the dress got done. I made the fabric part shorter than the pattern suggested, and if I made it again I would prefer it to be wider for more wiggle room. 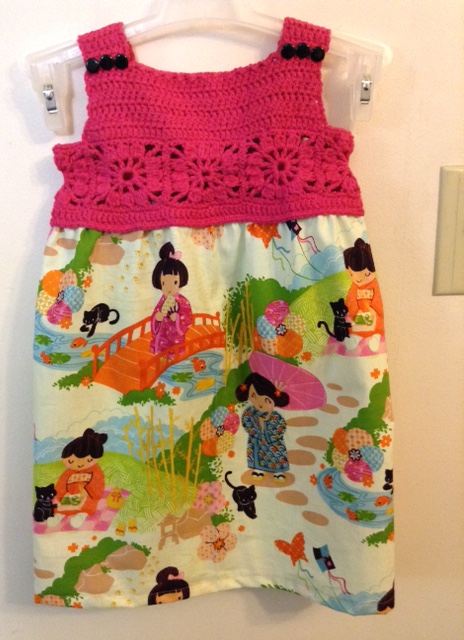 This is such cute fabric – another remnant from work. I now have a nice pile of goodies to send off to my sister’s grand-daughter, including the cat hat and a few burp cloths and a bib which I just whipped up tonight without a pattern. 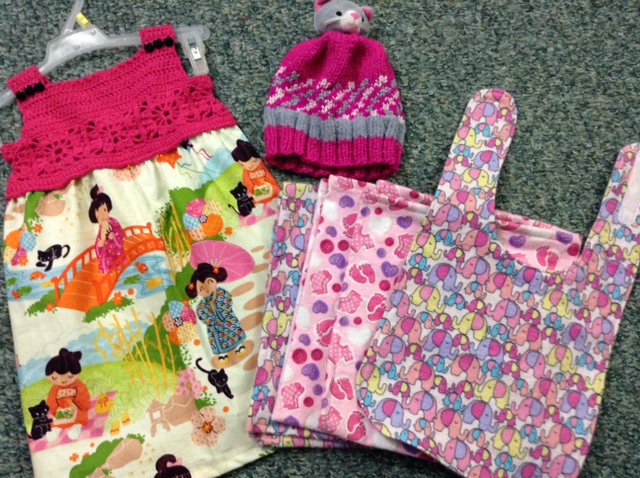 Rather a lot of pink in that picture, eh. I must be making up for having three boys myself!

Another FO is this Smooshy Scarf made with two strands of Loops & Threads Facets. I love the colours in this yarn, though it’s very underspun and will probably pill like heck from the get go.

Two strands gives you the equivalent of a super bulky, plus 12mm needles makes for fast progress. I started this in the morning while waiting for ds2 to have his cavities filled at the dentist, added more during my afternoon break at work, and finished it in the evening on the sofa. It’s already rolled up in a little gift bag and tucked into a co-worker’s cubby for her to find next time she’s at work.

I mentioned last week that I’d ordered some yarn from Herrschner’s but it’s not here yet. I am confident it will arrive just in time for my birthday, which is on Thursday.  It has to, right? (Speaking of which, I have planned for banana splits – I stopped at the health food store today and stocked up on organic bananas, chocolate chips and cashew-based ice cream. Nom nom!)

Tomorrow I should probably spend my day back in my sewing room, making curtains. I have a bunch of clearance panels from work for the basement windows, but they need new headings and hemming.

Have a great day!