Well hello there, I’m back with more news of the March sweater.

Yesterday was a heavy crochet day – I spent a LOT of time on the couch and almost finished the back. I did go for a walk in the evening with Tai Chi Man to get some fresh air and some blood flowing through the veins, though.

The back was kinda boring, being all black, and it was nice to start on the coloured stripes for the right front today (after my 8am yoga class).

My first Ravelry project page update, earlier today, showed that I had done five blue stripes and was just starting on the green part of the yarn cake. In order to keep the coloured sc rows fairly visible, I’m crocheting the black rows in the front loop only. This leaves a little extra colour visible on the right side.

I’m also “cheating” with the colour. The blue did five rows and I made sure that the green would arrive on the sixth. So when I’d done five green rows I cut some out so that the acid yellow would appear on the next one. I want to make sure that all five colours in the cake appear across the front of the sweater (which is actually going to be a sleeveless vest with a wrap front). 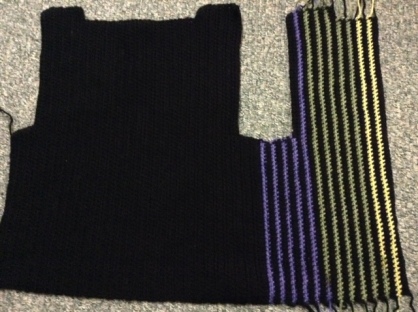 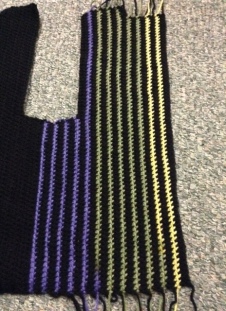 Tricky to photograph black, especially when there are other colours involved in part of the shot. Of course I’m only using an old iPad Mini, so I guess I can’t expect too much. (And those ends! Lots of weaving in to do later.)

So that’s it for today. I’ve put down my hook for the night, even though it’s only 9.20pm. I’d rather go and get into my PJs and read in bed for a while because I’ve realised that staying up late is not serving me well. Thankfully I’ve finished all seasons of Mr Selfridge now, and am reluctant to start another series. It’s just too easy to binge watch episode after episode.

So apart from crochet, this week’s entertainment is finishing A Dog’s Purpose (yes, the book that the film was based on, though I haven’t seen the film) and starting on the third book in the Poldark series, Warleggan.

I gave a work shift away to a co-worker whose schedule was messed up so the coming week has me doing two shifts instead of three, which means…you guessed it…more crochet time! I estimate the March sweater will take no more than a week in all and then I can decide what to knit for April! Oh yes, and the Ravelry Ravellenic Games start on February 9th, and I am entering the toy event, so I need to do a bit of preparation for that before next Friday.