G’day all. Another week has whizzed by and now we are enjoying (!) a somewhat cool weekend. The max for today is forecast to be 15 degrees. It’s windy and a mix of sun and cloud right now, but yesterday morning we had torrential rain at about 7am which coincided with time that Tai Chi Man and all three man-boys were headed out to work on the same job (Tai Chi Man works at an office furniture supply/installation place, as does ds1, and sometimes ds2 and ds3 go to help with big projects). I was also working yesterday, but managed to wangle leaving half an hour early because we had a house guest.

The son of some friends of ours from over the pond came to visit. He flew to Calgary so that he could visit the national parks in Banff and Jasper but drove all the way  to see us for just one night. The drive was nine hours, no doubt with rest stops, but I’m pleased he made the effort. It was lovely to see him. We’ve known him since he was a baby and he’s 32 now.

So yes, stash! This time, fabric, not yarn.

When I’m working at the fabric store, we aren’t supposed to shop for ourselves, and usually we don’t have time anyway. So I dropped ds3 there today, because he had an extra shift, and became a customer. It’s nice to be able to browse all the clearance quilt cottons without worrying about being interrupted, and I went through them all and picked out 15 of them for (probably) making more bags. I also invested in some heavy duty thread because when I was making the bags with the vinyl panels I had some major thread breakages happening.

I am in love with this fabric. I actually have two co-ordinating fabrics in this line. It’s printed with fun camper vans and scooters and for the drawstring casing I used a lime green floral fabric that I’ve had for ages. I can’t remember which video tutorial I used for this but it was a clear one that was easy to follow. The one thing I would do differently next time would be to place the casing higher, as there’s a lot of wasted space at the top.

Next week there’s a 50% off sale at work and I intend to pick up more interfacing and zippers so I can sew more bags!

The Maui Ocean Cowl has grown a little – it’s now 5.5 inches deep and the pattern says to go to 8″. (Pattern: Pool Party Cowl from Balls to the Walls Knits) 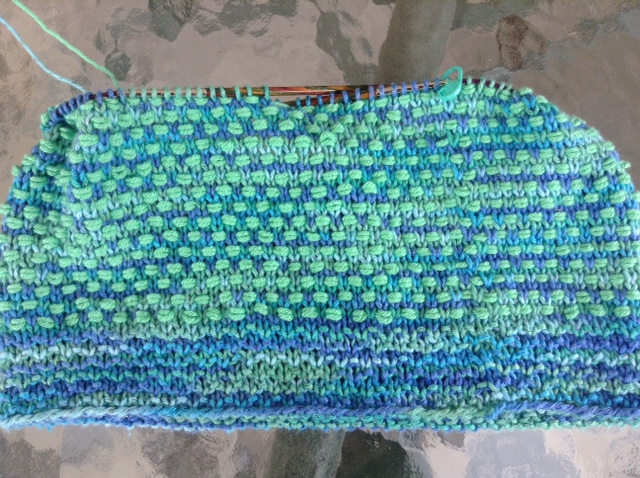 The colours I’m using are very similar to the designer’s, and are very calming.

That’s it for now. Have a great week!