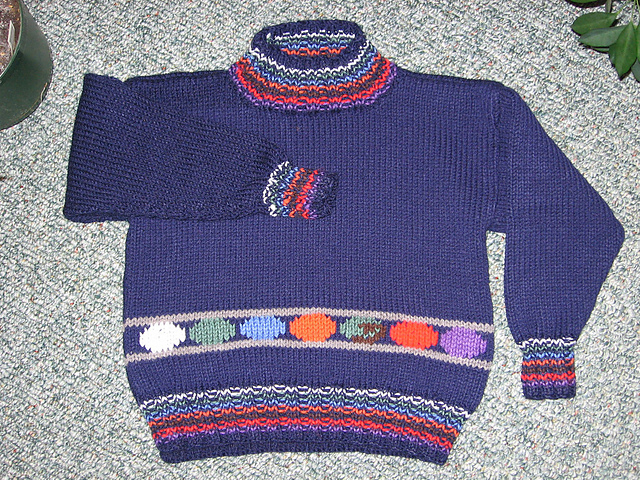 This week I’m featuring a sweater I made for my youngest son who, according to my project notes, was 9 at the time (he’s 21 now). He was mad about the Deltora Quest books so for Christmas I thought I’d knit him a sweater with a Deltora theme.

Featured in the books is the Belt of Deltora, a steel belt which holds seven gems, the first initials of which spell the word Deltora. I made the front, back and sleeves on my Bond machine and hand knitted the ribbing and duplicate stitched the gems across the front.

I can’t recall him wearing the sweater very much. He wasn’t a very cold-blooded kid, and even now he rarely wears a sweater, and doesn’t bother with a coat much either, unless he’s snowboarding.

I see I bought the yarn at Zellers – that’s a throwback right there – all the Zellers stores closed down years ago. I did like having that store in town, as it was a handy Canadian alternative to the dreaded Wal-mart!