Saturday was a work day, with an incredible amount of rain. It was so dark outside the store, it felt like a really long day, because it felt later than it actually was.

Today it looked like it was going to be another wet and windy day, but the sun came out and it ended up being bright most of the day, which was lovely. I had a bit of a lie in, and called my mum and sister on Facetime. Tai Chi Man and I went out for a cuppa at our favourite tea shop, and of course I took some knitting.

This afternoon, we did some shopping at our favourite health food store (oops, some special Christmassy chocolate jumped into my basket, Zazubean’s Dasher (white vegan chocolate with cranberries and cocoa nibs OMG) and also I found an essential oil diffuser on clearance. I’ve been wanting one of those for ages so I snatched it up. I have it going right now with orange and lemon oils in it. Smells divine!

Before the sun set and we got too relaxed, we went off to the gym for a 45 minute workout. I did treadmill and legs today. I’m being careful  not to overdo things with the left shoulder, for which I’m getting physio, and for which I have special daily exercises.

Once we’d had dinner, it was time to make mincemeat. Mince pies, aaaaah, one of my favourite things about December. Whether we’re celebrating the Solstice, Christmas or whatever, it’s just not the same without mince pies. I like to make my own, which means it’s vegan and fat-free. No need for suet. I can’t remember where I found this recipe, but I’ve been using it for years.

I’ll give you the recipe too in case you want to try it out. It’s supposed to sit in airtight jars in the fridge for 4 – 6 weeks. When you fancy a nice mince pie, you can whip up a batch of pastry (or buy it frozen if that’s what you prefer) and make little tarts, with or without lids, or large ones.

I like to use a mixture of dried fruit. This is a combination of raisins, golden raisins, cranberries and currants. 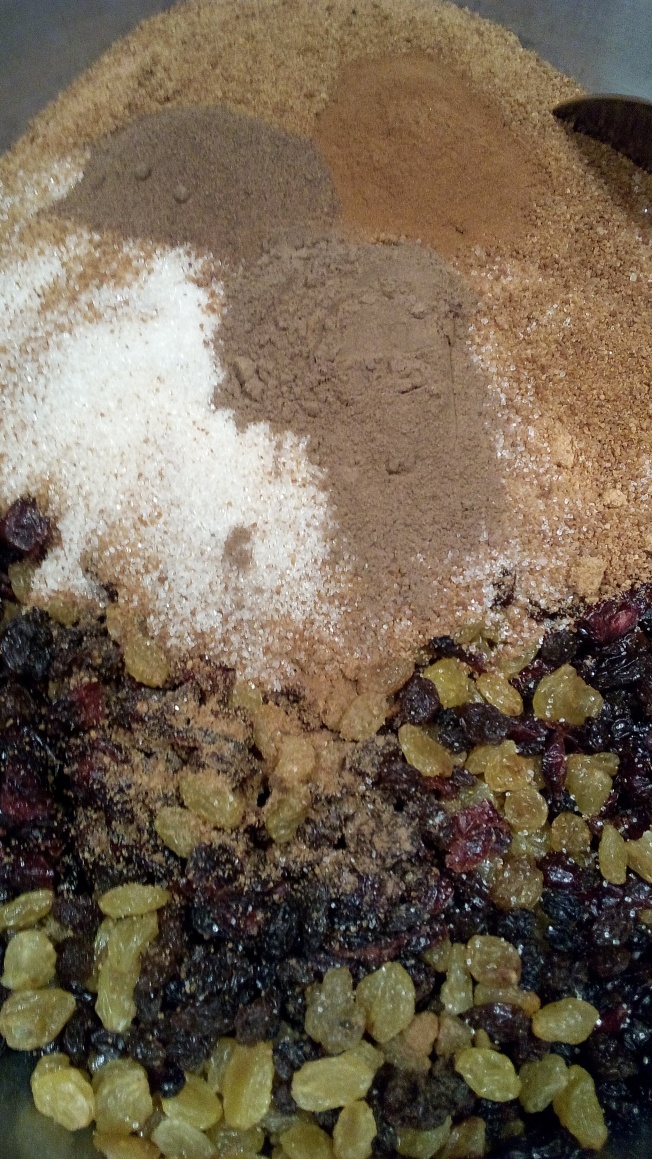 Then you add in your sugar and spices (I used a combination of organic sugar and coconut sugar, plus cinnamon, nutmeg and allspice).

And then you add your wet ingredients – lemon juice, apples and apple juice. If you have organic lemons with no icky coating, you can put in the zest as well. Give it a good stir, leave it covered in the fridge overnight, stir it up again, and then put it into airtight jars. I use mason jars with the two part lids, but you don’t can it, you just put the jars into the fridge and forget about them until Christmas.

This quantity makes about four medium mason jars full. But this year I doubled the quantity as I may give some away to friends.

Let me know if you try it out.

1lb (about 4, depending on size) chopped apples

Mix all in large bowl, leave covered overnight in fridge. The next day, mix it again, pack into sterilised jars with airtight lids. Leave in fridge 4 – 6 weeks.