The 22nd, eh! Nearly there. The lead up to Christmas is always so long and drawn out, and then BAM! it’s all over. What with going away for a week earlier in the month, I am not feeling very organised as far as Christmassy things are concerned.

I did sew more bags – a total of ten so far – and gave two of them away. The tenth one is for me (and I spent a little extra time on it and added internal pockets). I have also invested in a big pack of batting from work so I am well set for bag padding for a while.

Today was our first “big meal” of the season, rather appropriately right on the Solstice. I spent the morning cooking cashew nut roast, sweet potato casserole, roast potatoes and Brussels sprouts, gravy, a large mince tart and a jam tart (to please the kid who doesn’t eat dried fruit) with coconut cream. I packed it up and we drove to our friends’ house and had lunch with sparkling apple juice and soy nog (which I am now calling Neggnog because there’s no egg in it)!!

We got the tree set up yesterday (there are benefits to buying it late; it was half price). It is beautiful and I will leave it up probably until mid-January!

My plan is to go all out on Christmas Eve, and on the 28th when we have friends over for a potluck, but the other days will be kept simple, because I don’t want to spend my entire days off cooking. I do still need to bake fruit cakes though, so that will probably happen tomorrow, after I’ve been to the gym. 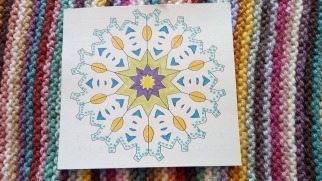 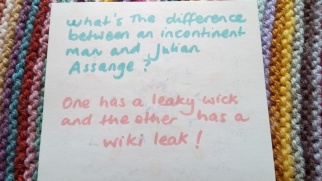 I recently participated in a secret Christmas cracker swap in a British group on Ravelry. There was lots of amusing chatter about the relative size of different brands of toilet roll tubes. The instructions were to stuff a loo roll tube with a knitted or crocheted item, some treats, and  a cheesy joke, decorate it, and send it to your swap partner. The person who sent me a cracker was not the same person to whom I sent one.

I had a lot of fun thinking about what I would stuff into the cracker, and because my swapee likes owls I made sure to include a crocheted owl in the package. The joke above was one I found online (you may have to click to make the pic bigger to read it). 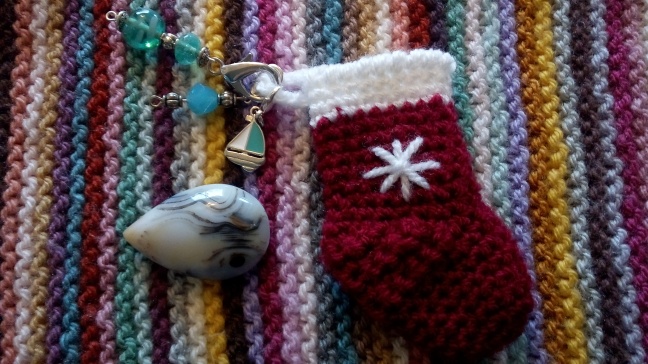 You’ll see from the photo at the very top that I wrapped my cracker in a piece of sequinned fabric which can be reused. I crocheted a gingerbread heart and a mini stocking, made some stitch markers and a beaded bracelet, and added some other little things that I managed to squeeze into the tube.

Now that everyone has opened their crackers, I can show you these pics, which have been lurking on my phone for a few weeks. In return, I received a cracker with a little knitted beaded sweater inside which I now have hanging on my tree. 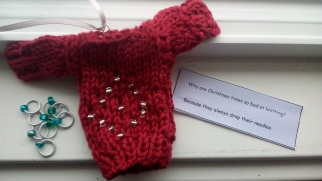 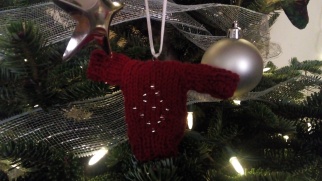 It came with a joke and some stitch markers. Apparently there were supposed to be chocolates inside but they wouldn’t fit in the tube so my sender ate them herself! I was a bit disappointed about that. When I sent my cracker, I included some chocolate but just put it in the padded envelope alongside the cracker. Ah well! It’s not like I need the extra calories.

Some more fun mail arrived this week. I won a prize from Hannah of The Cozy Cottage Crochet. She has giveaways on her podcast all the time and I received these lovely cotton pastels from Paintbox Yarns. They are 50 gram balls, DK/#3 weight. 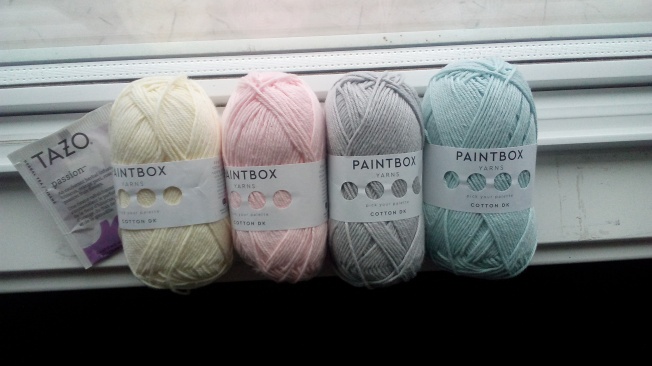 Not great light at this time of the year, even right in the window facing south!

The cracker thing has inspired me to make one for each of my immediate family – there are five of us – and yes, I know I have left it to the last minute yet again. I need jokes (easy to find online), cash for the boys, and some small gifts which will fit inside loo roll tubes. And maybe some nice pieces of Christmassy fabric to wrap them in.

Those are my festivities so far. I hope you are enjoying this time of year, whether you celebrate the Solstice, Yule, Christmas, Hanukkah or nothing. Stay warm, stay safe.