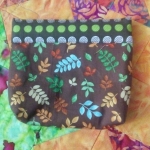 I’ve been having a little play with small pieces of fabric and video tutorials again. I have had the notion in the back of my mind to try making snap bags. Do you know what I mean? They are little pouches with a top opening that pops open when you squeeze the sides, and snaps closed when you let go.

I had watched the Riley Blake Designs tutorial some time ago and managed to find it again. She makes it look so easy. Well, I struggled! However, it wasn’t that it was a bad tutorial, the fact is, I was using an industrial strength measuring tape that my oldest son had donated to my cause! (It was broken and I had asked him if he had any tapes of the metal kind, the ones that roll back into their case when you let go of them.)

I had a few issues with this first bag. The wide tape measure barely fit into the casing. The triangles did not end up centred. And the side seams couldn’t be sewn too close to the ends of the tape or the sewing machine foot fought with them. Wait, actually this was my second attempt to make this bag, but the first one never made it this far. I realised that I needed to make my fabric pieces wider to allow for sewing past the metal tape ends.

Anyhoo, I ended up with a usable bag, but the industrial strength measuring tape snaps so well that it nearly takes your fingers off, and the ends of the tape don’t meet properly at the side seams. The triangular flaps are great for pulling the bag open though.

This time, I used a tutorial from Gourmet Quilter. She starts out similarly, but doesn’t use the triangle idea. For the casing, she folds the edges down right over the top of the outer fabric. (The Riley Blake video has you fold a quarter of an inch, and then fold it so it just covers the top edge of the outer fabric. The downside to that is you only have a single layer of fabric covering the tape.) With Gourmet Quilter, making the generous folds means you can insert the tape so that you have two layers of fabric on one side and a layer of fabric and batting on the other. And you also topstitch both sides of the casing creating a stronger channel.

She also boxes the bottoms which always seems to create a cuter bag!

I was happier with this bag, but without the triangle flaps to pull the bag open, I needed to be able to squeeze the sides of the bag to open it. Again, strong tape, too much play in the side seams, not ideal.

And now, introducing Mark III, the most successful attempt so far (despite me swearing at my machine because it started playing up towards the end – I didn’t realise the needle was bent and that’s why it was hitting the bobbin mechanism). 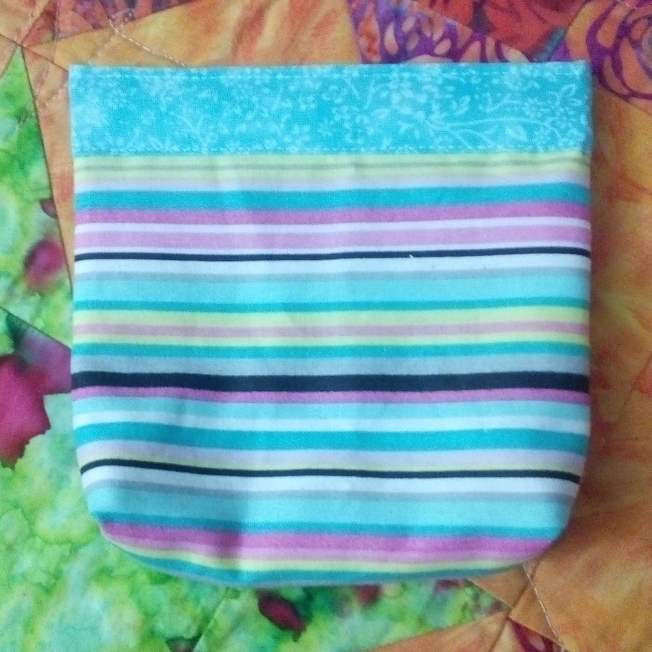 Tai Chi Man gave me a narrower and weaker tape measure today that was broken at the beginning but still perfectly usable further in. I was able to slide it into the casing with no problem, and also sew the side seams right alongside the tape ends, so that when I turned it right side out and tested it out, it worked perfectly! It’s not as strong of a snap, but the bag holds closed fine.

This final version measures five inches square. I don’t think you’d want to go wider than that as you wouldn’t be able to use one hand to squeeze it open. Five inches is a comfortable distance for me to open my hand. However you could certainly make it deeper for items such as crochet hooks, spectacles, etc.

It would be fun to make more of these, now that I have ironed out the kinks. It would be a good way to use up quilt cotton scraps. And for really small scraps, you could make a patchwork outer piece rather than use one solid piece of fabric. Hmmmm…I feel a whole family of these coming on!