Standard
The following was composed while travelling home from Switzerland on Saturday. We got home really late (like 2am  Sunday morning) and Sunday was busy with shopping and cleaning and stuff, so now, on Monday evening after a work shift, I am finally getting it posted.

I’m writing this while sitting in an airplane over Greenland. The view of the land and sea is magnificent! We are in an Edelweiss jet, returning home from Switzerland.

What an amazing two weeks! We spent part of the time in a small town called Silvaplana in the Swiss mountains, not far from St Moritz and the Italian border. I’d never heard of the place before, but Tai Chi Man’s cousin A and his wife L have a holiday caravan there every summer and we were booked into an Airbnb only five minutes walk from their campsite and the lake. My BIL, FIL and Tai Chi Man’s aunt and uncle also joined us.

It was a tiring journey, flying via Vancouver to Zurich, then having to pick up our rental car and meet up with the others and drive to Silvaplana. We didn’t get in until about 10 at night on the Sunday, having left home at 4pm on Saturday. However the cousins had a meal ready and after a good night’s sleep I was less grumpy!

Silvaplana is known for its lake and somewhat predictable weather. It’s the kitesurfing capital of Switzerland! Every morning at around 11am, most days, the wind starts to blow, and the kites and windsurfers come out in force. The week we were there, they had racing events too. It’s so colourful when all the kites and sails are out on the water. If you want to Stand Up Paddleboard (SUP) you can do that too, just do it early when the lake is calm. We enjoyed some pleasant walks with the family in and around Silvaplana and also tried SUP for the very first time. TCMan’s cousin is an active sort and had done it before, but for TCMan, BIL and me, we were newbies. I was the only one who wore a wetsuit. The lake is very cold and I rather expected to fall in, but amazingly I didn’t. I even managed to do a couple of yoga poses on the board, just for fun. And afterwards I jumped in the lake and floated about quite comfortably in my wetsuit and life jacket. TCMan went for a very quick dip in just his swimshorts.

We drove to St Moritz a few times. There was a good supermarket there which actually stocked vegan foods. Lots of things are labelled with the Vegan Society logo now, and we found Violife ‘cheese,’ some grated ‘cheese’ called Simply, and some ready meals, one of which we tried for a picnic lunch. Oh, and mustn’t forget the coconut chocolate chip ice cream. Apart from that, we ate simply – pasta, potatoes, salads, bread, fruit.

After just over a week in Silvaplana, we drove the others to Zurich airport and then the two of us went to our next Airbnb in Geissholz. Another place I hadn’t heard of before, but it’s not surprising when you see how small it is…about 12 houses up a mountain from a town called Meiringen in the Haslital. This time, the accommodation was small. Instead of a three bed, three bath, two level apartment, we had a studio in a beautiful traditional Swiss chalet. It was in a private home, and our host Elisabeth was very welcoming. One of the nice things about Switzerland is how clean everything is. Even the hillsides look tidy, having been mown of their grass for the cattle’s winter feed. And it’s all so green! After some hot weather in Silvaplana, which was somewhat unexpected and caught us out with some sunburned faces, we had wetter weather in Geissholz, though it didn’t interfere with our activities and I still wished I’d brought more hot weather gear. The thunderstorms were impressive, accompanied by a massive amount of rain in a short time, and I realized how the waterfalls can be endlessly rushing down the mountains. One day, thankfully a dry one, we drove a loop over the three mountain passes nearby. The Grimselpass, the Furka pass (the highest and apparently used for filming Goldfinger) and the Sustenpass were incredible and,  I have to say, quite terrifying with their narrow switchbacks and steep drops.

On our last day, we checked out of the accommodation at 8.45am and set out towards Zurich. We had plenty of time so we dropped in at TCMan’s cousin’s for lunch and a walk, and then drove to the airport. We had a cellphone with us, which we bought a SIM card for when we arrived, but we couldn’t get the HereWeGo app to work on the first day, which meant we were winging it on the way to Silvaplana, with a little telephone help from TCMan’s cousin on his aunt’s phone. We ended up missing a turn and going a bit out of our way, so it was good when we had the data/wifi working for subsequent trips out. Of course, it’s not perfect and with the larger intersections, especially around the bigger cities,  one can still end up taking a wrong turn. However our timing was fine getting to Zurich airport, despite the U turn and having to find a station to top up the diesel tank of our Opel Grandland SUV. (The HereWeGo app was great, but occasionally I’d switch to Google Maps to find the nearest gas station or whatever.) By the time we arrived at the gate, we didn’t have long to wait for boarding, though there was a delay in taking off due to a couple of passengers not showing up to board the plane and the baggage handlers had to find their luggage in the hold and remove it. Take off was therefore 45 minutes late, but this is one of those times where we were not concerned as we had a good buffer of time before our second flight.

I feel like we packed in a lot and the time didn’t whizz by too fast, but TCMan says he feels like it went by too quickly. Neither of us really wants to go home! We both have work on Monday, which gives us only one day to try and get enough sleep so that we aren’t too jetlagged to function. Not only that, but British Columbia has had a record number of fires this year and with that plus the extra smoke drifting in from Oregon the air quality has been the worst of anywhere in the entire world. Being away the last two weeks, we have missed the worst of it, but we’re not sure what we’re coming back to. I’m just grateful for this wonderful holiday and hope to return to Switzerland in the not-too-distant future for some further exploration. 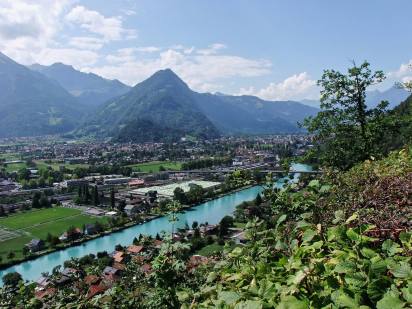 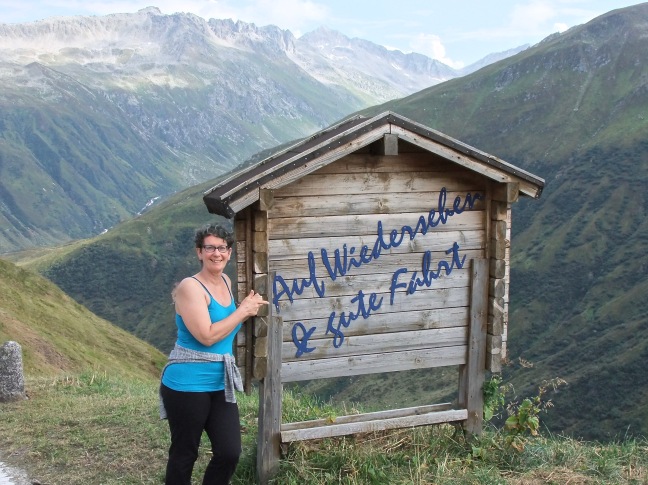 Above is a mosaic of pics taken by Tai Chi Man – click on them to make them bigger. I’m sure I had one of me paddleboarding but can’t find it now. There was crochet but I will save that for a future post.