Hey everybody, how’s it going? I’m enjoying a day off with very few commitments. I’ve been to the gym, put on some laundry, loaded the dishwasher. Not very onerous.

I have been having some heel pain lately. I will be sitting on the couch, get up, and get a nasty pain in the bottom of my right heel making me limp to the kitchen or wherever. Now, I know that Googling one’s symptoms often results in a lot of false hits, but this time I think I found the cause. It fits with plantar fasciitis. I assume it’s caused by my longer times on the gym treadmill including the running segments in addition to walking. Of course, I am also on my feet all day at work, on a concrete floor.

Apparently the best treatment for this is a combination of stretching, arch-supporting footwear and ice. I bought some insoles yesterday especially for this condition, and have taken to wearing my indoor gym shoes in the house as well. Friends say I should keep shoes on any time I am not in bed! Felt kind of odd at first, but now I’m finding it very comfortable.

Last night, Tai Chi Man and I went to the gym and I just did weights, but I went again this morning for some cardio and decided on the low-impact option – a stationary bike which is a recumbent style and has a very comfortable seat, unlike the ones with a standard saddle.

Onto yarny matters, my Wayfarer Wrap is growing at last. Picking it up when I watch Netflix certainly helps, and it is now 33″ long. “Only” 17″ to go. 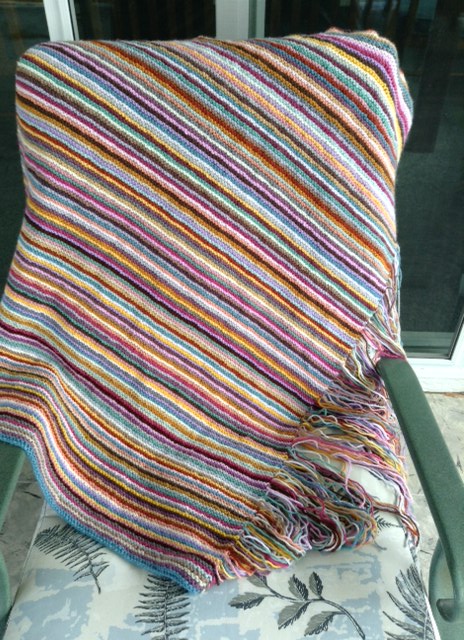 The billion ends along the edge are being left as a fringe, perhaps in bundles tied with overhand knots. I haven’t finalised that part of it yet.

Yesterday I met a friend for tea in the morning, then hit Costco for a bunch of food. I had plenty of time before I had to be back at home so I stopped in at my favourite tea shop on the way home for another cuppa and some crochet time. I like to make sure I have something portable with me when I go out. You never know when you might need some emergency crochet! 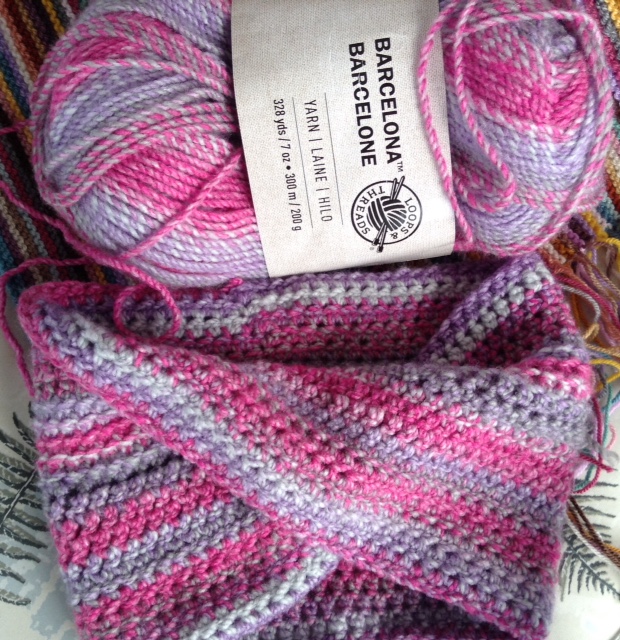 This is what I worked on while I was there. I added a little last night. I think it’s deep enough, but I’d like to add some sort of edging. This is a moebius cowl similar to one I made last year, where I start with a row of foundation stitches rather than chains (I used half double crochet this time), give it a half twist, then join and start working in the round. You end up with a true moebius which makes for a really comfortable cowl as the place where it twists is lower and fits perfectly under your chin.

It is also using up some stash yarn that’s been hanging around for some time.

After my last post in which I showed you more hats, I had quite the stack, so I filled a bag with about a dozen beanies and took it to the local Food Bank. Hopefully they will give them out to whomever wants them and someone will be warmer as a result. 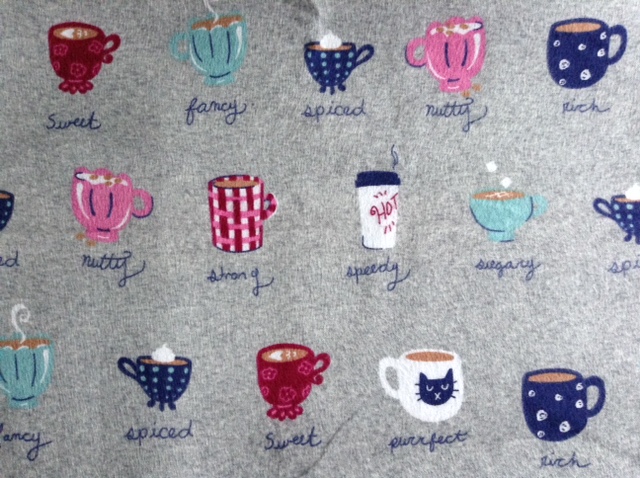 Finally, I found some lovely soft flannelette at work that’s a bamboo/cotton blend. It has a fun tea/coffee cup print so I bought some. I figured I could make something nice for the tea shop owner as well as for myself.

And with that, it’s time to say Goodbye for now. Hope you have a great weekend.