I do like a bit of alliteration, don’t you? The title just flowed out of my fingertips.

I am holed up in my bedroom this morning. This is Day Three of the window/door installers invading our house at 8am and changing out all the windows and doors. That’s about 15 windows, a sliding patio door,  and three regular external doors. The first day, I was at work most of the day, so it was just the two boys who were at home, literally chilling out! We had to turn the heat down because there was so much activity, with guys coming in and out, windows coming out and new ones going in. And the noise! Hammering, drilling, voices, music.

Day Two was ok as they were mostly working downstairs and the thermostat is upstairs so it was fairly comfortable.  Today I have turned it down again as they are doing the three doors, one of which is in the kitchen on the upper floor.

I know we will have a much warmer, quieter house when all is said and done, but poor old Tai Chi Man now has a new job on his home maintenance list. That of painting the primed window frames inside. We will have to get the bathroom and kitchen ones done ASAP so they are sealed against moisture.

Lurking in my bedroom is actually rather pleasant. I brought tea in here, my laptop, crochet, iPad (you know, all the essentials), I have an en suite half bathroom, so I can stay here while the guy working in the kitchen does his thing. 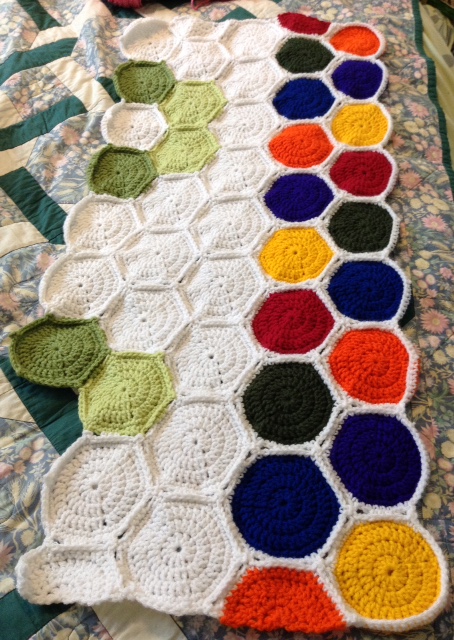 It’s hard to get this all in one photo, but I am working bottom to top on this baby blanket,  (that’s a link to my Ravelry project page) and right to left. The green of the caterpillar is now coming in. There are only two plain white rows of hexagons in the whole blanket, which is good, as the colours make it more interesting to crochet. I am being sure to weave in all ends as I go and with the join-as-you-go method there will be minimal finishing. 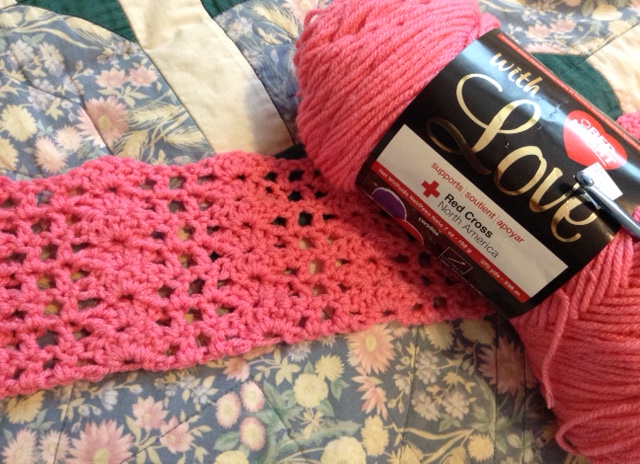 This second WIP is the Dreamy Lace Baby Throw from Lion Brand. (My project page.)

My boss said the other day at work that someone had over-ordered on the pink Red Heart With Love so she gave me a ball of it to work up a small baby blanket. The pattern asked for Pound of Love, and this ball is only 7oz, so rather than chaining 141 I did 101 to make a smaller version. The ball suggests a 6.5mm hook and that’s what I’m using. After the initial set up row, it’s a one row pattern with an easily memorised repeat. This progress was made last night at a friend’s house.

Before picking up this pink project again, I will be adding more to the caterpillar blanket, as time is ticking by and there’s a baby on the way.

My plant-based nutrition course is going really well. I have completed two parts now – Nutrition and Society, and Diseases of Affluence. Next, putting it all into practice – Applying the Whole Food Plant Based Diet principles. This third part starts today and has to be completed in the next two weeks.

I noticed that Forks Over Knives has a cooking course starting at the end of the month – it’s $349 if you sign up now, $399 after the 21st. I was tempted to go for it but then I realised that the information may be presented in the course that I am already paying for. So I’ll see how that goes, then if I feel I need more,  perhaps they will offer it again at a later date.

If you haven’t watched the Forks Over Knives documentary, I highly recommend it. It’s one of many documentaries that are available now on healthy eating to prevent and reverse chronic disease. A quote from one of the doctors on the course, “Food is the chemotherapy that you take three times a day.” That’s why it’s the most important thing you can do for your health.

OK, time to get some yarny stuff done. Have a wonderful day 🙂