Usually when I plan to write a blog post, I take a quick look at my previous post to see what I talked about so that I don’t repeat myself. Well, holy yarn, Batman, it’s been nearly two weeks! You must have thought I’d died. If you even noticed, that is 😀

So, what have I been up to. Firstly, this… 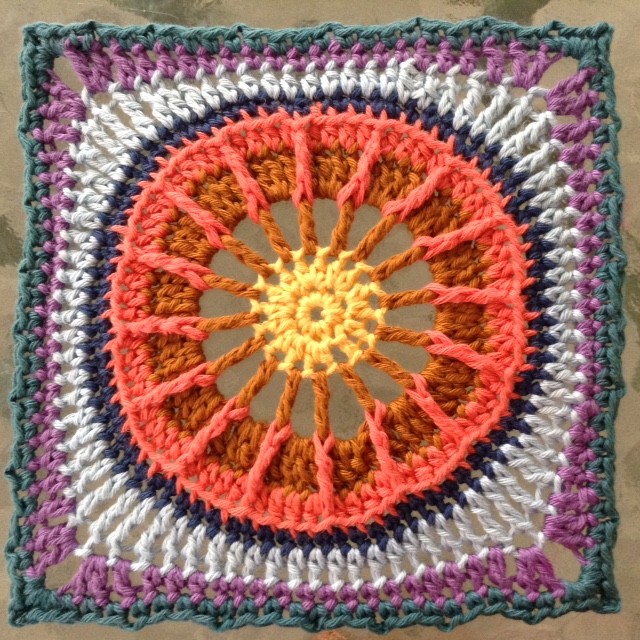 This is the beautiful Winter Sun Square by Pam at Hooks and Hills. She was asking for testers a while back so I quickly volunteered. I made it with the Stylecraft Classique Cotton DK and I happened to have similar colours to the ones she used in hers. I whipped it up in an evening and gave her a little feedback on her pattern along with my photos. She has published the pattern now, and that’s where the link above will take you.

Secondly, I brought home the cutest 100% cotton fabric remnant from work. It’s a full metre and of course being a remnant from the end of the bolt I got it at 75% off.

Yes, even skunks are sometimes cute.

Thirdly, I have AT LAST finished the four squares for the Kanata Kerchief Tank. I need to block them now. These used a teensy bit over six 50 gram balls of the Scheepjes Linen Soft – I have one ball left for the shoulder straps which had better be enough. 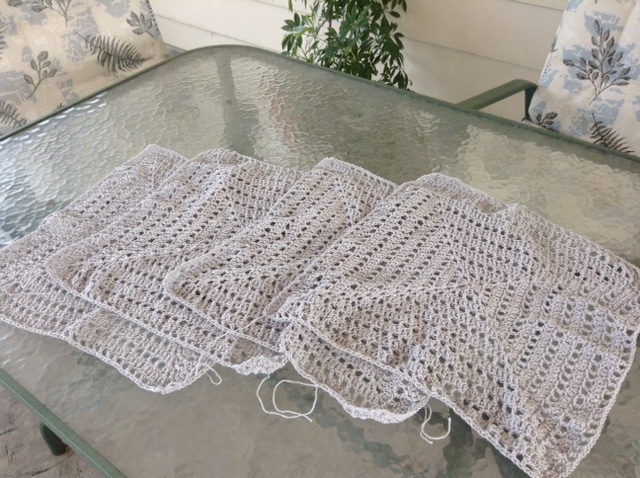 I had to rip back in a few places where my stitch count was off, but by the last square I was just desperate to finish and I did fudge a corner rather than rip out a whole round.

As for my plans to keep on top of all the things I want to do, the meditation has fallen by the wayside. I think a better plan would be to schedule an hour of crochet a day, but WITHOUT Netflix or other distractions. This would work like a moving meditation in which I could calm my thoughts while doing something with my hands at the same time.

French and German….well, Duolingo has been a bit neglected but I have watched a lot of German With Jenny’s You Tube Channel and also checked some children’s books out of the library in German to practise reading and comprehension.

My other blog, Grains Greens Berries & Beans, has a short new post inspired by a video I saw online  yesterday. I think what tends to make me procrastinate is that I want that blog to have long educational posts with lots of links and a pretty picture, AND I want to share on Facebook and Twitter, which all needs a solid chunk of time. If I lower my expectations a bit, I will probably blog more.

Exercise….I did make it to the gym last week, and had a long flat cycle ride with a friend this week. A Monday afternoon walk with Tai Chi Man was very pleasant followed by a cup of tea at our favourite little independent tea shop. When it’s this hot, the thought of getting even more sweaty is not appealing, though, and I am hoping that tomorrow’s forecast for a cooler day with RAIN actually pans out. Today is the 44th day without rain, which matches 2003 for drought. That year, we had the biggest baddest wildfire ever which burned for weeks,  across the mountains on the other side of the lake from us, and then started in on the houses at the south end of the city. Thousands of people were evacuated from their homes. This year, there have been hundreds of fires around the province, but thankfully the ones around here were relatively small and dealt with quickly.

Well, I think we are all caught up. I need to go out this afternoon to register for a class in the fall. I’ve decided not to go back to piano lessons for now, but I am going to join in with a class that some friends are presenting about Food and Health. They have asked me to do my presentation on one of the days, so I’m going to go for the whole six weeks. Plus I find it rather nice to have a predictable day off each week for getting things done.