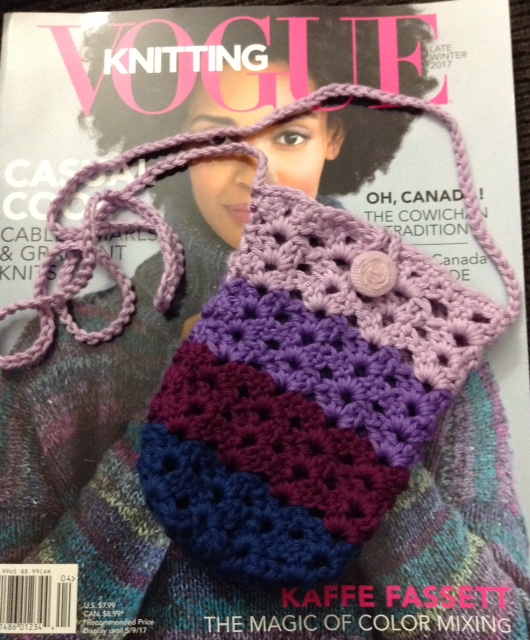 I had a little play with some of my Stylecraft Classique Cotton colours. I thought this would make a nice bag – sometimes you just need room for a phone and a key, and maybe a driver’s licence and a credit card.

I used the plum colour to seam it and I’m not 100% happy with how it looks, so rather than go with my original plan, which was to give it to a co-worker, I may just keep it for myself.

See that magazine there? It’s not often that I find a magazine worth buying, but I happened to be in London Drugs today and as usual I browsed through the available knitting magazines (there weren’t any crochet ones). Vogue Knitting has had some, shall we say, Interesting designs in the past that maybe a stick-thin model can get away with but on me, an average height, average weight, rather plain middle-aged girl, they would have looked just plain dumb! However I saw interesting articles, Canadian content and patterns I would actually knit, including a Cowichan-style sweater. Even though I don’t knit with wool, being vegan, I have long wished to make such a garment. I’m sure the knitting police won’t arrest me for using acrylic!!! 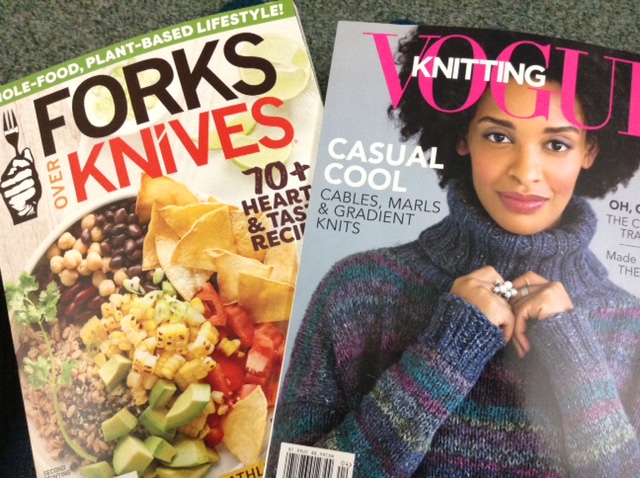 Whilst I already have adopted the whole-food, plant-based lifestyle and am now pretty adept at cooking vegan meals without oil, I do like to experiment with new recipes. Not only that, but I am currently preparing an educational presentation on the diet which needs to be ready by  next weekend for its first airing, and having this magazine to hand will, I think, be useful.

If you haven’t yet watched the Forks Over Knives documentary or checked out their website, I heartily recommend them.

I will shortly be retiring to bed with my new magazines, and the only reason I can get away with that tonight is that Tai Chi Man is working out of town so is not here to object to me reading in bed. He always goes to bed earlier than I do, because he works full-time and wakes early and is pretty knackered by about 10pm. Whereas I tend to stay up late (Netflix has a lot to answer for) and get up later in the morning.

Wishing you all a wonderful weekend. Happy crafting!