I’m sitting here in my favourite spot tonight; in my living room at my end of the couch (the other end belongs to Tai Chi Man but he’s out this evening). I don’t expect anyone to ring the doorbell because we have only ever given out candy once or twice in the 20 years we’ve lived here. We are the Scrooges of Hallowe’en. Keep the door shut, maybe even dim the lights and pretend to be out or deaf!

Being vegan, and raising vegan kids, meant that going out trick or treating never really appealed that much. The one time we did it, we had to pull out a lot of the candy and give it away. And I am not going to buy crap that I wouldn’t feed to my own children just to hand it out at the door.

When the boys were younger, we did carve pumpkins, but to be honest that has lost its appeal too. So much effort and mess for such a short-lived result, not to mention that my conscience is pricked when I think of our culture using food purely as decoration when they are so many people who are lacking enough to eat.

Well, that’s enough of my whining, now for some crochet. I have links! The coat that I mentioned in my last post is a free pattern based on one worn by some celeb or other who I probably have never heard of (did I say I don’t watch TV and that the celeb magazines at the store leave me cold)? The original cost over $1,000. Well, mine is going to be less than $50.

Coatigan in Grannies is the name, and here is the Ravelry link, and here is the Red Heart link. I’m not sure how realistic the gauge is, when you consider that I am using Stylecraft Special Aran, which is thinner than Super Saver, and a 5mm hook rather than the suggested 6mm for the size of square I need. I am aiming for the middle size and my squares should be 6.5″ but there are closer to 6.75″. And I usually go UP a hook size to meet gauge.

Here are the first nine squares:

The pattern uses a smaller, more coordinated, range of colours but I have a lot of this yarn to use up. I rejected lemon yellow, white, cream and fondant pink as I felt they would stand out too much. The lightest colours in these squares are parchment, camel, silver grey, and I am using them in the second round of each square. The centres can be brighter, but from the third round out I’m trying to keep things fairly sober. The last two rounds of each are black.

I’m not going to stress too much about how they look at this point. I am just going to crochet a bunch of them (I need 62 for the coat) and lay them out and if one just looks like a glaring mistake I’ll make a different one to replace it.

And now to pick up my hook. I found Leonardo di Caprio’s film, Before the Flood, available for free on You Tube today, so assuming it is still available I am going to watch it while I crochet.

Well, I spiffed up my couch cushions…

I’ve had this cheap and cheerful fabric around for at least a year, I think, and I still have about four metres each of lime on white and orange on white to use up! This worked well for my couch cushions because the couch is brown and I love turquoise. I just cut a metre of fabric, trimmed some off the width to square it up, then put the cushion in the middle, brought in two corners, then brought in the other two corners and tied them together. So much quicker than crocheting or sewing!

My crochet news is that I have finished the Happy-go-Lacy shawl, washed it and pinned it to my ever-so-sophisticated blocking mats. It should be dry very soon as it’s thin yarn and the weather is warm and dry. After I took this photo on my kitchen floor, I very carefully dragged the whole shebang into the living room where it will hopefully not be in the way.

This used three balls of Red Heart Heart and Sole and a 6mm hook. Next, my boss would like me to make something out of the RH Scrubby which should be fairly quick, though the yarn is quite rough and I’m not sure what it’s going to be like to work with. 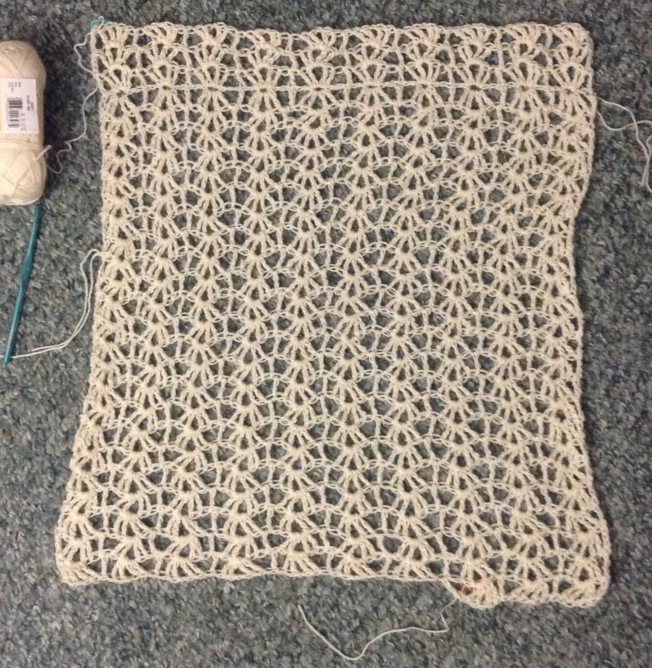 The first two days of working on this shawl I only achieved 11 rows. Tonight I picked it up (late, as I worked until 6 then had to make dinner and clean up) and crocheted up a storm while watching Crafternoon Treats’ podcast. (That link should take you to episode 1 of her podcast on You Tube.) I have to admit, I am really nitpicky about podcasts. Lots of things can put me off and make me hit Stop, from verbal tics to bad lighting to lack of interest in the content. However Kathy has drawn me in with lovely crocheted bags, blankets and shawls, and in her latest episode she talks about her Tunisian crochet workshop, her Road Trip scarf and her crocheted socks using Heart and Sole. Good grief, I thought, we are totally on the same page!

Anyway, back to the shawl. I used up the first ball of Heart and Sole and stuck a stitch marker in, then as per the pattern I returned to the foundation chain and started working in the other direction with ball #2.

If you look carefully at the photo (sorry, I know it’s another late night shot with my iPad on the living room floor!!!) you’ll see that I have completed three rows on the second half of the shawl (near the top of the work).  My plan is to use up the second ball and then split ball #3 between the two ends. When it’s gone, I’m done.

I don’t know why, but for two days now I’ve had a really stiff neck. Woke up with it yesterday morning and thought it’d be gone by nightfall, but no, it gave me pain on the right side during the night if if moved around and I have limited movement to the right. If it persists,  I’ll have to give the chiro a call.

It’s my sister’s birthday today, and rather than spending it at home she is currently in Kathmandu with her family on holiday. They were in Delhi for a bit, 40°C every day, and I don’t envy them that!

I may not be somewhere exotic but I’m very happy being where I am. I hope you are too. Happy crafting.

It’s a sock yarn, #1 on the official yarn weight guide, and it’s 75% wool and 25% nylon. The pattern I’m using is a Red Heart one – depending where you look, the shawl is called Enjoy Life or Happy-Go-Lacy (not sure about that name)!

Why am I neglecting my colourful poncho for an ivory coloured shawl? And why am I using a non-vegan yarn?

Well, as soon as she saw me this morning, my boss asked if I’d like to do some crochet to display in the store. It means I get a little free yarn, some crocheting time, my project displayed at work for a while, then I get to keep it (or decide on someone to give it to).

It’s a very open lacy fan pattern, every row is the same, and I think it will grow fast. It starts in the middle – you work outwards to one end, then return to your foundation chain and work in the other direction. A bit of blocking will stretch things out and tidy things up – right now it just looks like typical unblocked lace – unimpressive!

After six rows tonight my attention span had expired, so I’ll add more to this tomorrow. 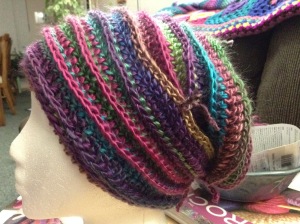 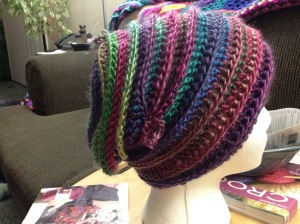 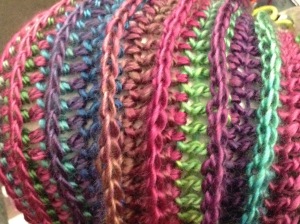 The manager at work arranged for the green Starburst cowl that I made recently to be displayed on a styrofoam head at work. She came up to me a couple of days ago and said, “She needs a hat!”

So I was given a skein of Red Heart Boutique Unforgettable in the Stained Glass colourway and the Red Heart pattern for this corrugated hat (which has an accompanying cowl, but I’m not making that).

It will go on display for a month and then I get it back to keep or do whatever I want with it. It only took two days worth of spare time to make. The corrugated effect is made with back post double crochets and then some of the ‘ribs’ are pulled together by little chains threaded through and knotted. I only added a few.

The colours in this yarn are gorgeous but I have to say, having used it before, that it’s not my favourite yarn to work with. And even though it’s rated a worsted weight, it’s pretty thin. Oh yes, and don’t plan to sew anything up with it – it’s not strong enough.

Have a happy day!