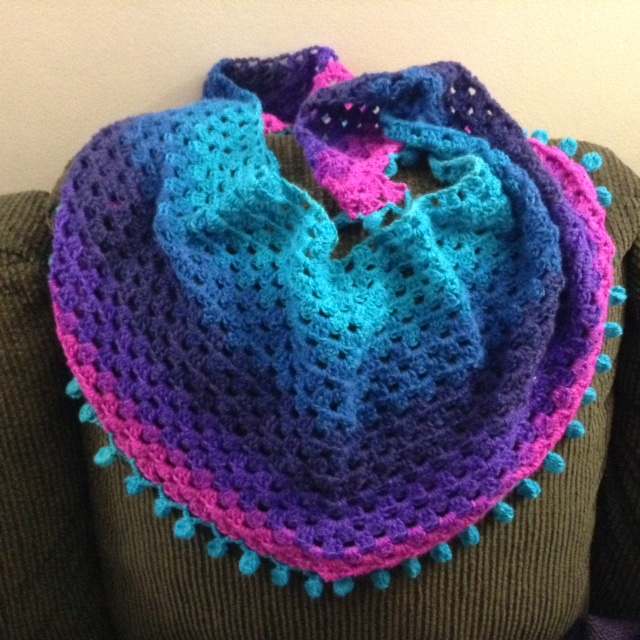 One of my favourite makes this year

I love to look back at my year’s knitting and crochet projects on Ravelry every December. Even when I don’t think it’s been a very productive year, I am usually surprised at how many Finished Objects I made. 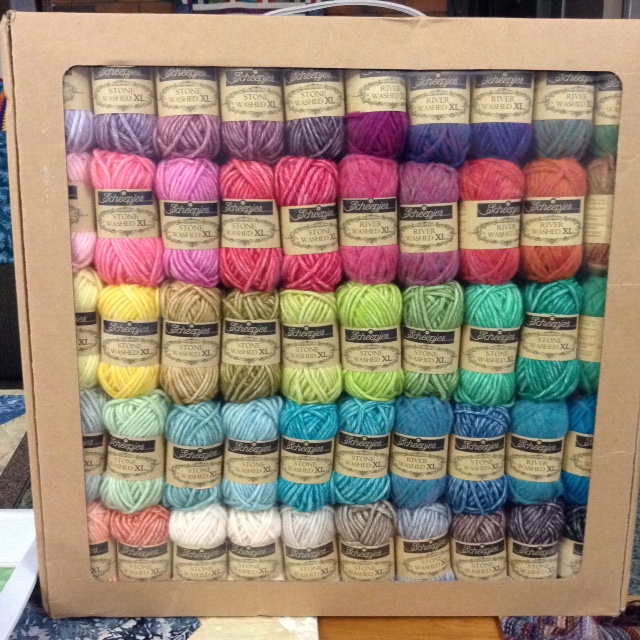 One of my few yarn purchases

This year was a good year for using stash. I signed up with the British Banter group on Ravelry to join their Bash the Stash 2019 challenge. The plan was not to go Cold Turkey and buy no yarn at all. My goal was more Lukewarm Sheep. Curb the acquisition of 100% synthetic yarn. Allow myself to mindfully purchase yarn which had at least some plant fibre content.

And, you know, I did pretty well. In January, I bought that pack of Scheepjes Stonewashed and Riverwashed mini skeins. It’s so pretty and I still haven’t found the perfect project for it. But it is on display in my sewing room and I know I will really enjoy using those amazing colours some time in the future. An LYS was going out of business in a nearby town and I bought some cotton yarns from them too. And then…nothing until November, when I went into Michaels and fell for some clearance yarn.

My totals at the end of the year, as posted in the British Banter group, are;

Total out this year: 8115 grams (knitted or crocheted into finished objects or given away)
Total in this year: 3700 grams (purchases and a few gifts)
Net output: 4415 grams (stash reduction) 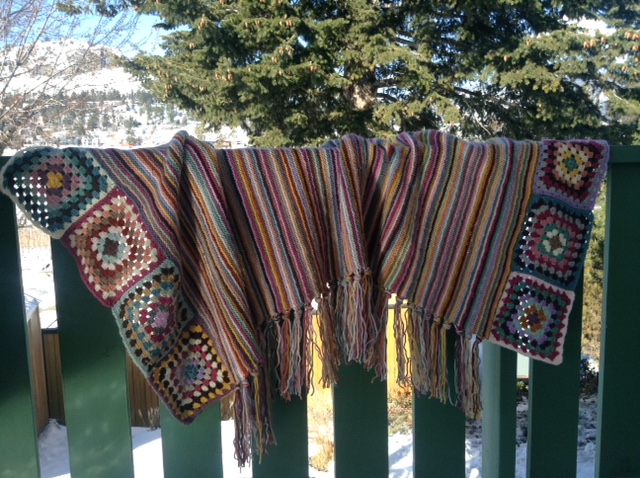 I love the finished item even though the garter stitch got tiresome!

Ravelry tells me I made 56 projects this year, but in fact some project pages include more than one item, so it was more like 77.

and a partridge in a pear tree!! 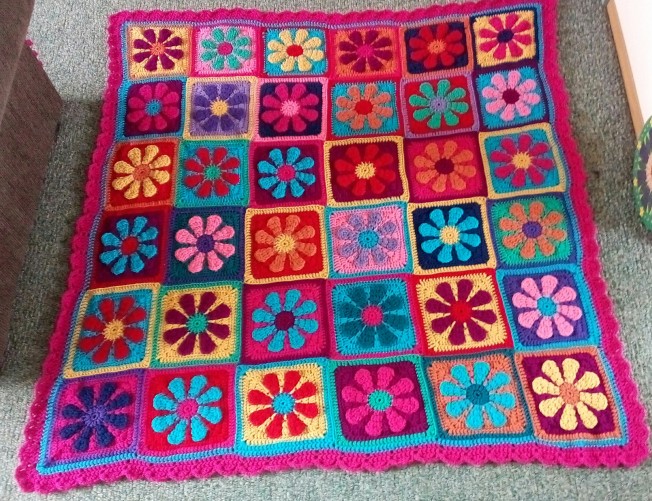 My favourite blanket of the year

I have four Works in Progress right now. The pink and grey sparkly shawl which I started in Maui. The Moe of Change blanket which I started in October and then neglected because it requires careful attention to the pattern. The scrap blanket that I’m knitting in the round on a huge number of stitches, which I think will get more attention now that the granny blanket is done. And finally, the cardigan, which was being made from a Secret Yarnery YouTube tutorial and which I had high hopes for. But even though I still like the colourway of the yarn (Lion Brand Mandala Baby in Echo Caves) and even though I actually ordered more yarn to get this cardigan finished, I think it’s going to be frogged. I can’t see myself wearing it and being happy in it. So officially that leaves me with three WIPs to carry me into 2020.

Considering my enthusiasm for sewing right now, three yarn WIPs is plenty. (Perhaps we should talk about my fabric purchases….or maybe not!) I really need to keep a good notebook for my sewing projects the way I do on Ravelry for yarn projects. Past notes tend to be scattered throughout various small notebooks and loose bits of paper, which means that if I want to make another version of a bag, for example, and want to know what size pieces I had to cut, it can be challenging to remember or remind myself what I did.

So that’s my year. What are your crafty highlights of 2019? Did you knit or crochet or sew something you were particularly proud of? Let me know in the comments.

One of the things I love to do at the end of the year is to look back through my Ravelry project pages and count how many Finished Objects there were. It is such a good way to record everything you make, what yarn you used, how much yarn, which patterns, and so on. I do sometimes make something more than once and it’s helpful to have a record of the hook or needle size I used with a particular project or yarn.

I just made a list of everything and here’s the final rundown:

That makes 74 FOs for 2018 which means it was one of my more productive years. Amazing, considering I was out of action for part of the year after my snowboarding accident.

My favourite project of the year has to be my Groovyghan (pictured at the top of this post).

My favourite hat? The one I just finished in two days flat and gave to one of my co-workers. Not only am I happy with the FO but I also had the satisfaction of giving it to her and seeing her reaction! 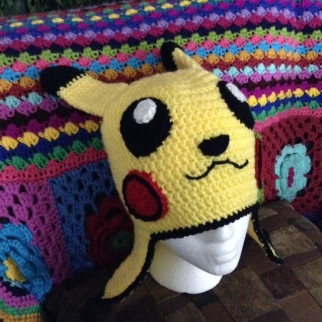 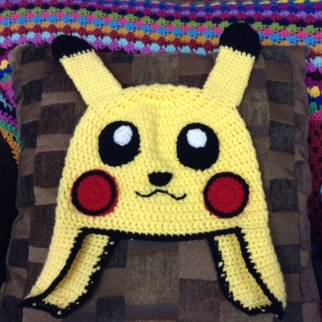 This was made with Red Heart With Love in Daffodil with extra touches of Holly Berry, Black and Eggshell. For more info, see my project page here.

I also finished the crocheted Candy Cane hat that I showed you as a WIP last time, and a brown slouchy beanie with some old stash yarn – James C Brett Marble Chunky. 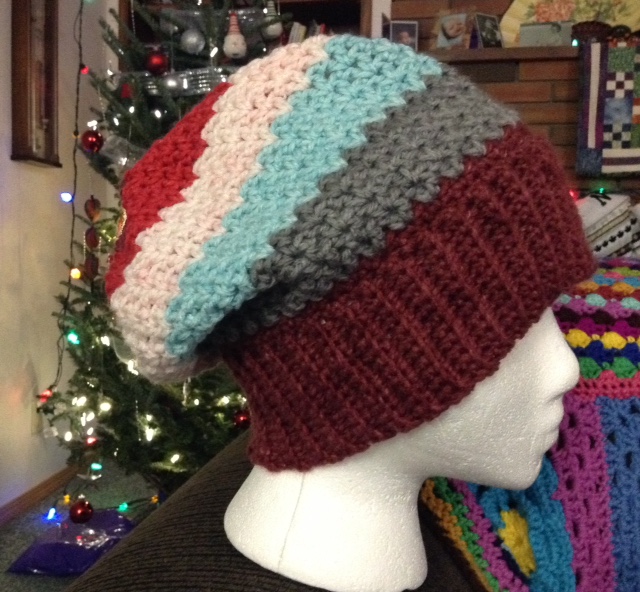 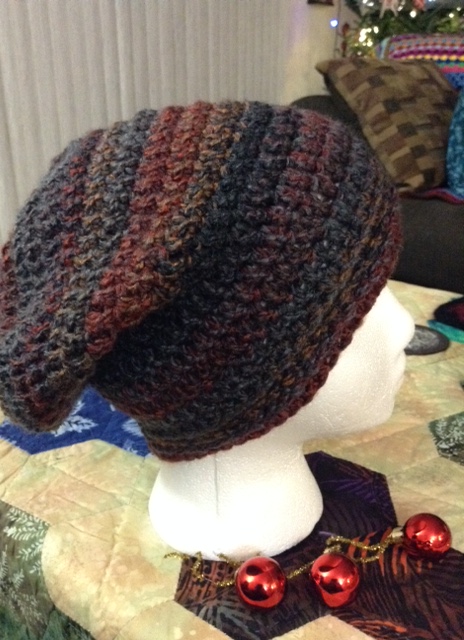 One of my current goals is to make beanies with the older acrylic in my stash and donate them.

Looking back on 2018, there have been some definite highs and lows.

January: I set a goal to make 12 sweaters and sew 12 garments in 12 months. Well, the sewing was a bust. But I was going great guns on the knitting and crochet until…

February: Any and all plans were called off as I broke my wrist while snowboarding on Family Day, February 12th. I had a fetching pink cast applied to my right arm. 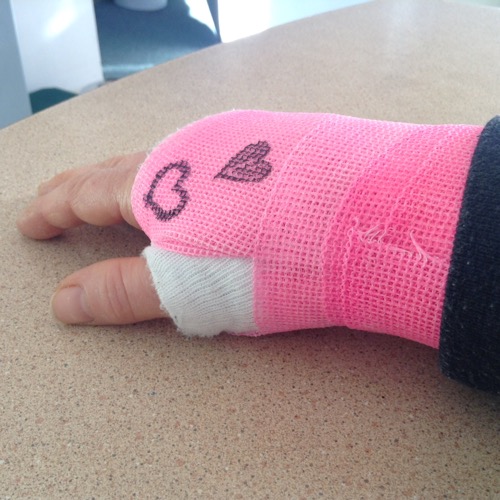 February 28th I had surgery for my distal radius fracture which involved acquiring a piece of titanium screwed to the bone, which will stay in indefinitely. I traded in my pink cast for a huge splinted dressing. Life was interesting, to say the least, with some pain and discomfort, and learning how to wash and dress with one hand.

March:  I was off work for nine weeks in all, so this month was all about recovery and not being able to drive, as my car is a manual/stick shift. I was so desperate to knit or crochet that I learned how to crochet left-handed with an adapted style. Knitting was too painful.

April: I was visiting rehab regularly to get my healing progress checked and finally returned to work. I also managed to get the Paper Bag Princess finished after a long hiatus for my grand-niece. 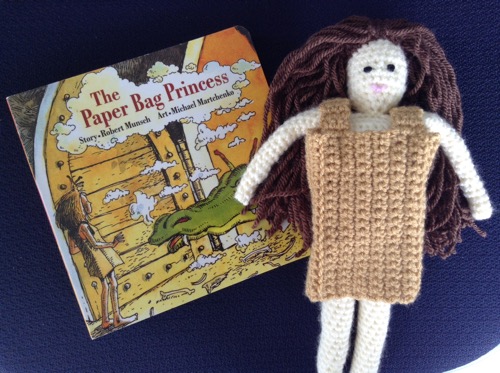 May: I was back at the gym and doing all my usual activities. I was back into knitting – this hat was for my father-in-law and was my first knitting project after the break – and I was also sewing up project bags for fun. 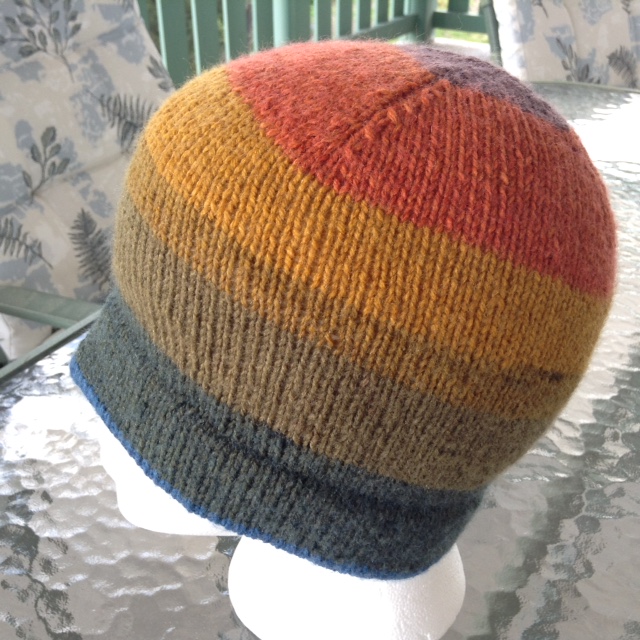 July: This was the peak of forest fire season, and we had multiple fires burning at once in our valley. 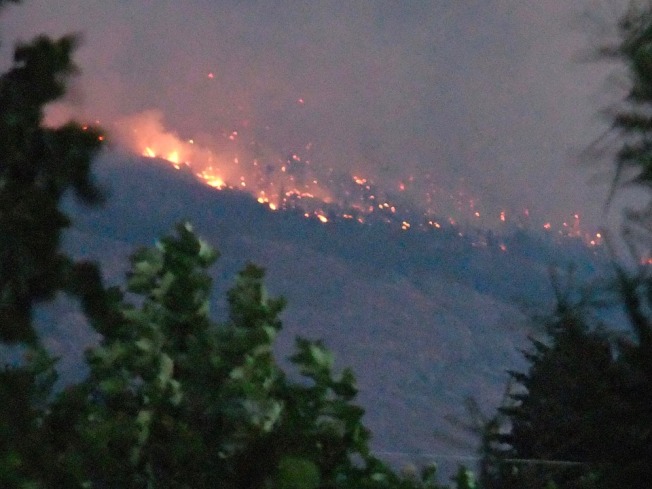 August: Tai Chi Man and I had an awesome vacation in Switzerland, spending time in the mountains near the Italian border and in the Bernese Oberland. We had a wonderful time, visiting his cousins and meeting up with other family members, and having some couple time for the last few days. 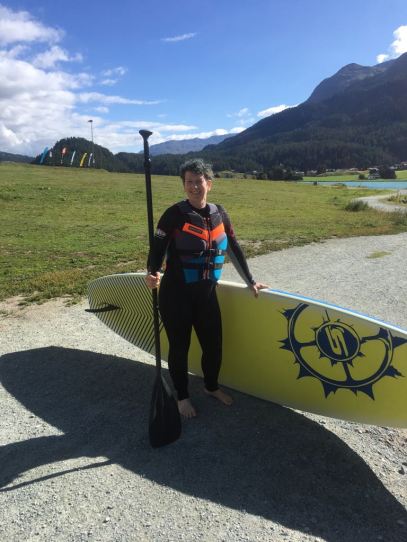 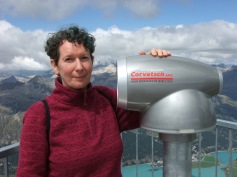 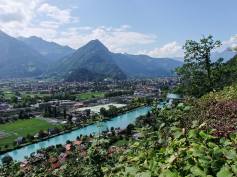 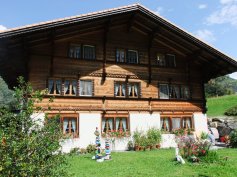 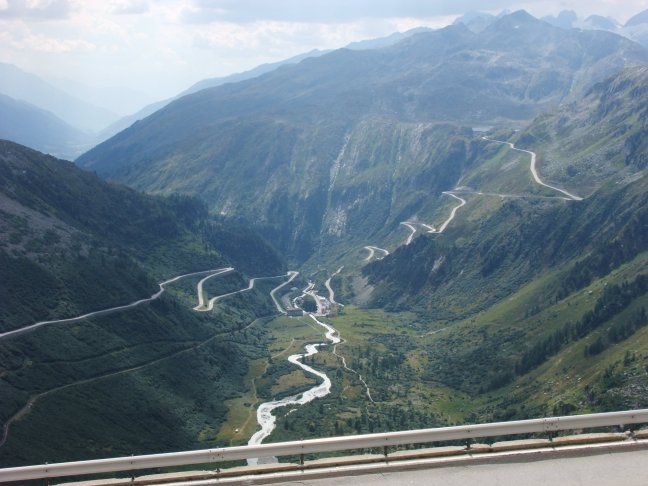 September: This was the month of the Groovyghan. It took almost exactly a month to make. It was a very addictive project.

October: In full swing, churning out lots of FOs.

November: Back to the hospital, this time to have a stapedectomy (replacement of the stapes with a prosthesis) in my right ear. This fixed the hearing loss that I had as a result of otosclerosis, a hereditary calcification and fusing of the bones in the inner ear. Now I am the proud owner of not one, not two, but THREE pieces of titanium (one in each ear and one in my wrist). Recovery from this surgery was painless and, thanks to a different drug, easy, without the insane vertigo that I experienced in 2015 when I had my left ear done.

December: We had a beautiful few days at one of our favourite retreats for our 31st wedding anniversary. There was a little scare with one of our sons suddenly having a partially collapsed lung. Chest pain led him to call 911 and he was taken to the hospital by ambulance (we were away at the time) and sent home in the morning with a pump in his side to draw out air and fluid from around the lung. Thankfully it was only needed for three days at which time they removed it and he seems to be fine now.

The lead-up to Christmas was pleasant, and we enjoyed lots of good eating including mountains of home-made fruit cake. I still have a fruit cake in the freezer. I ended up making four, two with wheat flour and two gluten-free. Cake #1 was scoffed by Tai Chi Man and me over about three days before Christmas. Cake #2 went with us to our friends on Christmas Day, where we had a lovely time playing games, exchanging gifts, eating too many calories and having a singalong around the piano. The remains came back and were demolished. Cake #3 went to work with me on Boxing Day and everyone seemed to enjoy that. Cake #4 will be defrosted later this week when I hope to get some of my friends together in one place for a belated Christmas cuppa.

I just remembered that, of the four jars of mincemeat I made, I still have one in the fridge, so there will have to be some more mince pies in the near future. The store where I work has a big sale every New Year’s so I had work today and will be going in tomorrow, but then I have five days off in a row. That will give me time to actually clean my house (rather overdue) and do some more baking. I hopped on the scale at the gym the other day and it wasn’t showing an upward trend so I think I’m OK!! We did go gymming every day for four days up until Christmas, and dragged the boys out for a long walk on Christmas Day, so the exercise has not been neglected.

What a year! I am looking forward to seeing what 2019 has in store. I hope you all have a wonderful year – you know it’s going to speed by and before we know it it’ll be Christmas again! Make the most of it!