The valley is less smoky today, but the fires are still burning. The two fires that are burning just south of us on the west side of the lake were merged into one, deliberately, in a controlled burn today. The news article I just read said that this would make it easier to tackle. The one directly across from that, on the east side, is still smouldering, but when we were out walking this evening it didn’t look very active and doesn’t seem to have spread any closer to the southern end of the city.

Two of my sons and I drove down the other evening to a beach where we could see the flames on both sides of the lake. It looks very impressive after dark, with the orange glow, and even more so when you get the binoculars out and can see details of trees and flames even from many kilometres away.

I am currently enjoying a block of days off – my schedule happens to include four days in a row between shifts. It probably had something to do with the mild complaint I made to my boss about working five Sundays in a row. So it’s been a lovely weekend, enjoying a potluck with friends, and visiting a vegan market, and having tea at our favourite tea shop, and going out for a walk around the neighbourhood this evening after the sun hid behind the mountain and it wasn’t too hot.

And there’s been crochet. Just a couple of very small, fun projects which I was inspired to make when I spotted this video tutorial.  It’s for a mini backpack that is really small, keychain sized really, but it still has little shoulder straps to make it look like a real backpack. I made the first one with Red Heart Supersaver Ombre in the colour Scuba  (about 30 grams) and a 5mm hook and it came out about 4.5″ tall. The second one uses Scheepjes Linen Soft in the colour Hummingbird (about 20 grams) and a 3.5mm hook and it is about 3.5″ tall. 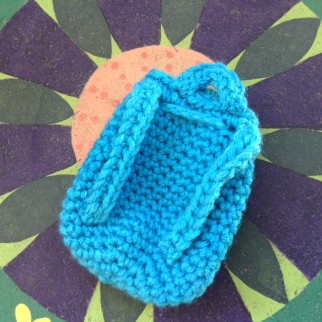 The pattern tells you to braid a little cord from three strands of yarn, which I did for the turquoise one, but it was fiddly and annoying so for the pink one I just worked a chain with my hook.

And I almost forgot, but I found Lion Brand Mandala at my local Walmart. I have been enviously seeing other people’s posts in the Canadian Crocheters group on Facebook, where they say they found a display of the Mandala yarn at their local Walmart. The few cakes of this yarn that I have bought were from Herrschner’s online. Well, I bought some this week from Walmart for less money, AND no shipping fees of course. They don’t have the whole range, but I found some I liked. One of them is actually a Mandala Baby cake, but it has the same yardage etc as the Mandala.

So pretty. A couple are new to me, and the rest are ones I’ve bought before. But when I ordered from Herrschner’s I only bought one cake of each colour and then realised I wanted to have at least two so that I could have more options as to patterns.

It’s just as well my birthday is coming up and I have money from my mum! I shall choose my projects carefully for these babies!!

Hello, my dear blogreaders, how are you all? A week has whizzed by yet again and I’m afraid I don’t have much crafty stuff to show for it. I think I managed a few rounds on a sock in skinny yarn and skinny needles, but not much else. Oh, and a scrappy dishcloth. Not even worth photographing.

But I’ve been busy at work, as we had inventory prep to do. We’ve been working towards a deadline, with management tagging practically every bolt in the fabric store with a number, and the rest of us laying down the bolts in piles according to their number. Yesterday was the big day and we started at 7am. Sixteen people in four teams (with eight extra people drafted in from outside to do the heavy lifting) worked their way through the store with industrial scales to get everything weighed and recorded. We took nine hours total. The store was open from 9.30am so there was other staff working just to look after customers and make sure that they behaved themselves, not walking into the areas we were working in and making off with pre-counted rolls or bolts.

We had two 15 minute breaks and one 30 minute one over the course of the day, and the manager had made sure there was plenty of good food available so that we were kept recharged. We were all knackered by the end of it (my youngest son works there too, and my middle son came along just for the day, for the third year in a row, plus I drafted in a couple of friends’ sons too). So glad it’s over for another year. I was totally brain dead after dinner last night, with just a brief period of animation when my family told me to go outside on the deck and look at the view.

So, back to the title and photo at the top of this post. Yes, once again the Okanagan Valley is smothered in heavy smoke from forest fires. It’s a standard situation for us. We had a skookum thunderstorm on Tuesday night (I love that word) in which there was impressive thunder and lightning and monsoon-like rain. Unfortunately, whilst we enjoy watching a good storm, it is immediately followed by reports of how many hits it made and how many fires it started. There were many, but the two main ones in our immediate area are (a) close to a little town about 15 minutes drive south of us, in which many people have been evacuated, and (b) across the lake in a huge wild area which burnt for a whole month in 2003. At that time, the fire caused thousands of people to be evacuated and burned over 200 homes. So obviously, memories of that year are being stirred up now, as we watched the flames last night. We could see them with the naked eye but with a camera or binoculars it was easy to see the activity of the flames.

The photo above is my husband’s, taken with a long lens. Those trees are close to my house – thankfully the fire is way away across the lake. With the wind, heat and dry conditions, people at the southern end of the city across the lake are looking nervously towards the fire, hoping that they will not see a repeat of 2003.

I am glad that today I have a day off to recover from yesterday and get a few things done around the house. I really need a gym workout too. I will undoubtedly be checking in with local news sources over the course of the day to see what’s developing. I am grateful  that my family and home are safe and away from the danger zones.